Click Here for Items Related To - Crown of Aragon


The Crown of Aragon (; an|Corona d'Aragón; ca|Corona d'Aragó; es|Corona de Aragón) was a composite monarchy, also nowadays referred to as a confederation of individual polities or kingdoms ruled by one king, originated by the dynastic union of the Kingdom of Aragon and the County of Barcelona and ended as a consequence of the Spanish War of Succession. At the height of its power in the 14th and 15th centuries, the Crown of Aragon was a thalassocracy controlling a large portion of present-day eastern Spain, parts of what is now southern France, and a Mediterranean "empire" which included the Balearic Islands, Sicily, Corsica, Sardinia, Malta, Southern Italy (from 1442) and parts of Greece (until 1388). The component realms of the Crown were not united politically except at the level of the king, who ruled over each autonomous polity according to its own laws, raising funds under each tax structure, dealing separately with each ''Corts'' or ''Cortes'', particularly the Kingdom of Aragon, the Principality of Catalonia and the Kingdom of Valencia. The larger Crown of Aragon must not be confused with one of its constituent parts, the Kingdom of Aragon, from which it takes its name. In 1469, a new dynastic union of the Crown of Aragon with the Crown of Castile by the Catholic Monarchs, joining what contemporaries referred to as "the Spains", led to what would become the Monarchy of Spain, as a composite monarchy under Habsburg monarchs. The Crown remained until it was abolished by the Nueva Planta decrees issued by King Philip V in 1716 as a consequence of the defeat of Archduke Charles (as Charles III of Aragon) in the War of the Spanish Succession.

Formally, the political center of the Crown of Aragon was Zaragoza, where kings were crowned at La Seo Cathedral. The 'de facto' capital and leading cultural, administrative and economic centre of the Crown of Aragon was Barcelona, followed by Valencia. Finally, Palma (Majorca) was an additional important city and seaport. The Crown of Aragon eventually included the Kingdom of Aragon, the Principality of Catalonia (until the 12th century as County of Barcelona), the Kingdom of Valencia, the Kingdom of Majorca, the Kingdom of Sicily, Malta, the Kingdom of Naples and Kingdom of Sardinia. For brief periods the Crown of Aragon also controlled Montpellier, Provence, Corsica, and the twin Duchy of Athens and Neopatras in Latin Greece. The countries that are today known as Spain and Portugal spent the Middle Ages after 722 in an intermittent struggle called the ''Reconquista''. This struggle pitted the northern Christian kingdoms against the Islamic taifa petty kingdoms of the South and against each other. In the Late Middle Ages, the expansion of the Aragonese Crown southwards met with the Castilian advance eastward in the region of Murcia. Afterward, the Aragonese Crown focused on the Mediterranean, acting as far as Greece and Barbary, whereas Portugal, which completed its ''Reconquista'' in 1249, would focus on the Atlantic Ocean. Mercenaries from the territories in the Crown, known as ''almogàvers'' participated in the creation of this Mediterranean "empire", and later found employment in countries all across southern Europe. The Crown of Aragon has been considered an empire which ruled in the Mediterranean for hundreds of years, with the power to set rules over the entire sea (for instance, the ''Llibre del Consolat del Mar'' or ''Book of the Consulate of the Sea'', written in Catalan, is one of the oldest compilation of maritime laws in the world). It was indeed, at its height, one of the major powers in Europe. However, the different territories were only connected through the person of the monarch, an aspect of empire seen as early as Achaemenid Persia. A modern historian, Juan de Contreras y Lopez de Ayala, Marqués de Lozoya described the Crown of Aragon as being more like a confederacy than a centralised kingdom, let alone an empire. Nor did official documents ever refer to it as an empire (''Imperium'' or any cognate word); instead, it was considered a dynastic union of autonomous kingdoms.

The Crown of Aragon originated in 1137, when the Kingdom of Aragon and the County of Barcelona (with the County of Provence, Girona, Cerdanya, Osona and other territories) merged by dynastic union upon the marriage of Petronilla of Aragon and Raymond Berenguer IV of Barcelona ; their individual titles combined in the person of their son Alfonso II of Aragon, who ascended to the throne in 1162. This union respected the existing institutions and parliaments of both territories. The combined state was initially known as ''Regno, Dominio et Corona Aragonum et Catalonie'', and later as ''Corona Regum Aragoniae'', ''Corona Aragonum'' or simply ''Aragon''. Petronilla's father King Ramiro, "The Monk" (reigned 1134–1137) who was raised in the Saint Pons de Thomières Monastery, Viscounty of Béziers as a Benedictine monk was the youngest of three brothers. His brothers Peter I (reigned 1094–1104) and Alfonso I ''El Batallador'' (The Battler, reigned 1104–1134) had bravely fought against Castile for hegemony in the Iberian peninsula. After the death of Alfonso I, the Aragonese nobility that campaigned close him feared being overwhelmed by the influence of Castile. And so, Ramiro was forced to leave his monastic life and proclaim himself King of Aragon. He married Agnes, sister of the Duke of Aquitaine and betrothed his only daughter to Raymond Berengar IV of Barcelona, member of one of the most influential families in southern Occitania. The wedding agreement provided Raymond Berengar IV the title of ''Princeps Aragonum'' and ''Dominator Aragonensis'' (Ruler of the Kingdom and Commander of the Aragonese Military) and kept the title and honors of King of Aragon to Ramiro II. Raymond Berengar IV, the first ruler of the united dynasty, called himself Count of Barcelona and "Prince of Aragon". 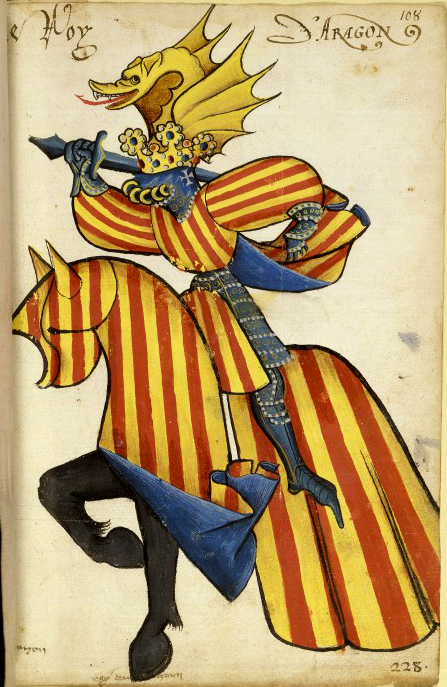 upFerdinand V and Isabella I, King and Queen of Castile and León, and later of Aragon, Valencia, Sicily, and Majorca In 1410, King Martin I died without living descendants or heirs. As a result, by the Pact of Caspe, Ferdinand of Antequera from the Castilian dynasty of Trastámara, received the Crown of Aragon as Ferdinand I of Aragon. Later, his grandson King Ferdinand II of Aragon recovered the northern Catalan counties—Roussillon and Cerdagne—which had been lost to France as well as the kingdom of Navarre, which had recently joined the Crown of Aragon but had been lost after internal dynastic disputes. In 1469, Ferdinand married Infanta Isabella of Castile, half-sister of King Henry IV of Castile, who became Queen of Castile and León after Henry's death in 1474. Their marriage was a dynastic union which became the constituent event for the dawn of the Kingdom of Spain. At that point both the Castile and the Crown of Aragon remained distinct territories, each keeping its own traditional institutions, parliaments and laws. The process of territorial consolidation was completed when King Charles I, known as Emperor Charles V, in 1516 united all the kingdoms on the Iberian peninsula, save the Kingdoms of Portugal and the Algarve, under one monarch—his co-monarch and mother Queen Joanna I in confinement—thereby furthering the creation of the Spanish state, albeit a decentralised one.

The literary evocation of past splendour recalls correctly the great age of the 13th and 14th centuries, when Valencia, Majorca and Sicily were conquered, the population growth could be handled without social conflict, and the urban prosperity, which peaked in 1345, created the institutional and cultural achievements of the Crown. The Aragonese crown's wealth and power stagnated and its authority was steadily transferred to the new Spanish crown after that date—the demographic growth was partially offset by the expulsion of the Jews from Spain (1492), Muslims (1502) and the expulsion of the Moriscos (1609). It was unable to prevent the loss of Roussillon in 1659, the loss of Minorca and its Italian domains in 1707–1716, and the imposition of French language on Roussillon (1700) and Castilian as the language of government in all the old Aragonese Crown lands in Spain (1707–1716). The Crown of Aragon and its institutions were abolished in 1716 only after the War of the Spanish Succession (1701–1714) by the Nueva Planta decrees, issued by Philip V of Spain. The old regime was swept away, the administration was subsumed into the Castilian administration, the lands of the Crown were united formally with those of Castile to legally form a single state, the kingdom of Spain, as it moved towards a centralized government under the new Bourbon dynasty.

Some of the nationalist movements in Spain consider the former kingdoms of the Crown of Aragon to be the foundation of their nations, the Catalan nationalist movement being the most prominent. Spanish nationalism, on the other hand, tends to place more importance on the later dynastic union with the Crown of Castile, considering it the origin of one Spanish nation. The reprisals inflicted on the territories that had fought against Philip V in the War of Succession is given by some Valencian nationalists and Catalan nationalists as an argument against the centralism of Spanish nationalism and in favor of federalism, confederation, or even independence. Some Catalans associated their ancient privileges with their Generalitat and resistance to Castile. Because restoration of ''fueros'' was one of its tenets, Carlism won support in the lands of the Crown of Aragon during the 19th century. The Romanticism of the 19th century Catalan Renaixença movement evoked a "Pyrenean realm" that corresponded more to the vision of 13th century troubadours than to the historical reality of the Crown. This vision survives today as "a nostalgic programme of politicised culture". Thus, the history of the Crown of Aragon remains a politically loaded topic in modern Spain, especially when it comes to asserting the level of independence enjoyed by constituents of the Crown, like the County of Barcelona, which is sometimes used to justify the level of autonomy (or independence) that should be enjoyed by contemporary Catalonia and other territories.

The origin of Coat of arms of the Crown of Aragon is the familiar coat of the Counts of Barcelona and Kings of Aragon. The Pennon was used exclusively by the monarchs of the Crown and was expressive of their sovereignty. James III of Majorca, vassal of the Kingdom of Aragon, used a coat of arms with four bars, as seen on the Leges palatinae miniatures.

The house of the Crown was the Cathedral of the Savior of Zaragoza from Peter II (12th century). The parliament used to gather at Monzón (13th to 16th centuries), the remaining meetings took place at Fraga, Zaragoza, Calatayud and Tarazona. The councillor headquarters were located at Barcelona (13th to 16th centuries) and Naples during the kingdom of Alfonso V. On the other hand, the General Archive of the Crown of Aragon, which was the official repository of royal documentation of the Crown since the reign of Alfonso II (12th century), was located in the Monastery of Santa María de Sigena until the year 1301 and then moved to Barcelona. In the early 15th century the de facto capital was Valencia, until Alfonso V came to the throne. During the 15-16th century the Crown's ''de facto'' capital was Naples: after Alfonso V of Aragon, Ferdinand II of Aragon settled the capital in Naples. Alfonso, in particular, wanted to transform Naples into a real Mediterranean capital, lavishing huge sums to embellish it further. Later the courts were itinerant until Philip II of Spain. The Spanish historian Domingo Buesa Conde has argued that Zaragoza ought to be considered the permanent political capital, but not the economic or administrative one, due to the obligation for kings to be crowned at the Cathedral of the Savior of Zaragoza.

The crown was made up of the following territories (which are nowadays parts of the modern countries of Spain, France, Italy, Greece, Malta, and Andorra). Sort by "Earliest annexion" to see the states in the chronological order they were joined to the crown.


Coat of arms of the kings of the Crown of Aragon


Archive of the Crown of Aragon, pl. del Rei, Barcelona.