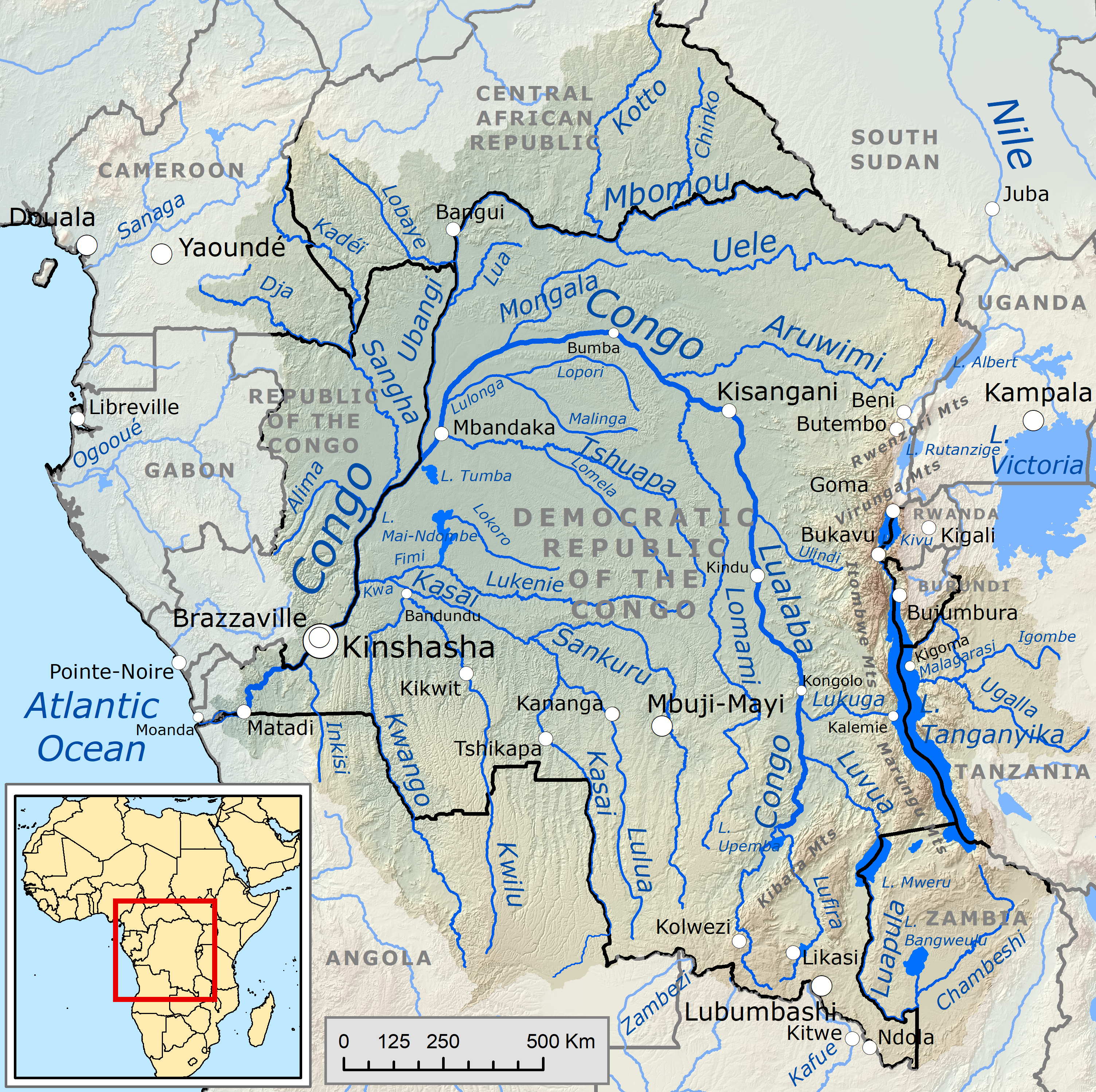 The Congo Basin (french: Bassin du Congo) is the sedimentary basin of the Congo River. The Congo Basin is located in Central Africa, in a region known as west equatorial Africa. The Congo Basin region is sometimes known simply as the Congo. It contains some of the largest tropical rainforests in the world and is an important source of water used in agriculture and energy generation. Because of its size and diversity, many experts have characterized the basin's forest as important for Climate change mitigation, mitigating climate change because of its role as a carbon sink. However, Deforestation in the Democratic Republic of the Congo, deforestation and degradation of the ecology due to the Effects of climate change, impacts of climate change may increase stress on the forest ecosystem, in turn making the hydrology of the basin more variable. In turn, a 2012 study found that the Climate variability and change, variability in precipitation due to climate change will negatively effect economic activity in the basin. 8 sites of the Congo Basin are inscribed on the World Heritage Site, World Heritage List, 5 being also on the list of World Heritage in Danger (all 5 located in DRC). 14% of the humid forest is designated as protected.

The basin begins in the highlands of the East African Rift system with input from the Chambeshi River, the Uele and Ubangi Rivers in the upper reaches and the Lualaba River draining wetlands in the middle reaches. Due to the young age and active uplift of the East African Rift at the headlands, the river's yearly sediment load is very large but the drainage basin occupies large areas of low relief throughout much of its area. It is delineated largely by Swell (geology), swells including the Bie. Mayumbe, Adamlia, Congo-Nile Divide, Nil-Congo, East African, and Zambian Swells. The basin ends where the river empties its load in the Gulf of Guinea on the Atlantic Ocean. The basin is a total of 3.7 million square kilometers and is home to some of the largest undisturbed stands of tropical rainforest on the planet, in addition to large wetlands. Congo is a traditional name for the equatorial Middle Africa that lies between the Gulf of Guinea and the African Great Lakes. Countries wholly or partially in the Congo region: *Angola *Gabon *Burundi *Cameroon *Central African Republic *Democratic Republic of the Congo *Republic of the Congo *Rwanda *Tanzania *Zambia

Belgian colonial empire, Belgium, French colonial empire, France, and Portuguese Empire, Portugal later established Colonialism in Africa, colonial control over the entire region by the late 19th century. The General Act of the Berlin Conference of 1885 gave a precise definition to the "conventional basin" of the Congo, which included the entire actual basin plus some other areas. The General Act bound its signatories to neutrality within the conventional basin, but this was not respected during the First World War.

The climate is equal, with two rainy seasons including very high rainfalls, and high temperature throughout the year The forests of the Congo Basin affect rainfall across the North Atlantic. In other words, these forests are crucial to the future of climate stability, a bulwark against runaway climate change. 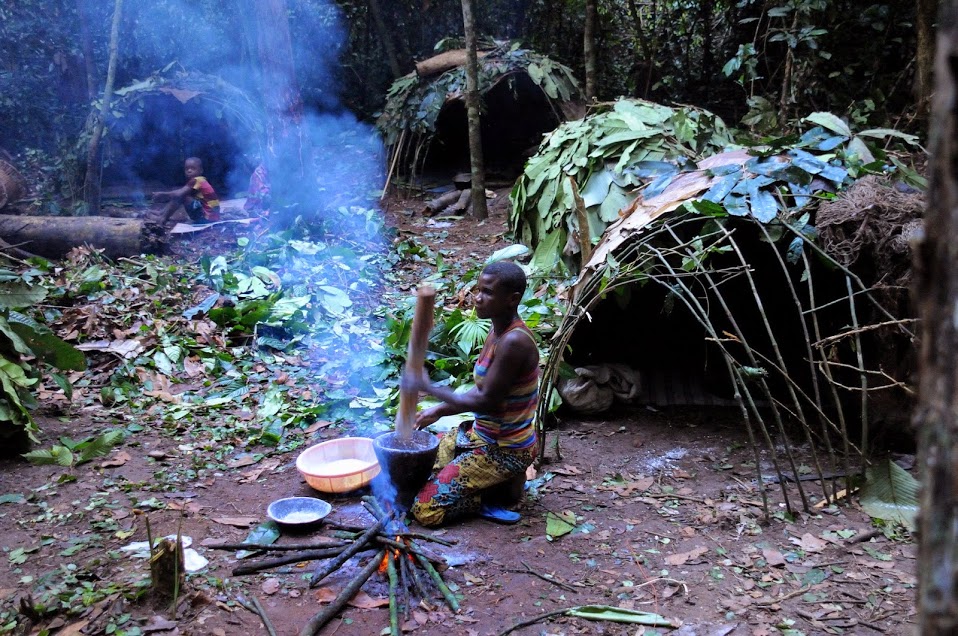 The basin was the watershed of the Congo River populated by Congo Pygmies, pygmy peoples, and eventually Bantu peoples Bantu expansion, migrated there and founded the Kingdom of Kongo. The World Resources Institute estimated that 80 million people live in and around the Congo Basin.

The Congo forest is home to okapi, bonobo and the Congo peafowl. The basin is home to the endangered western lowland gorilla. In 2010, the United Nations Environment Programme warned that gorillas could be extinct from the Greater Congo Basin in a matter of 15 years. 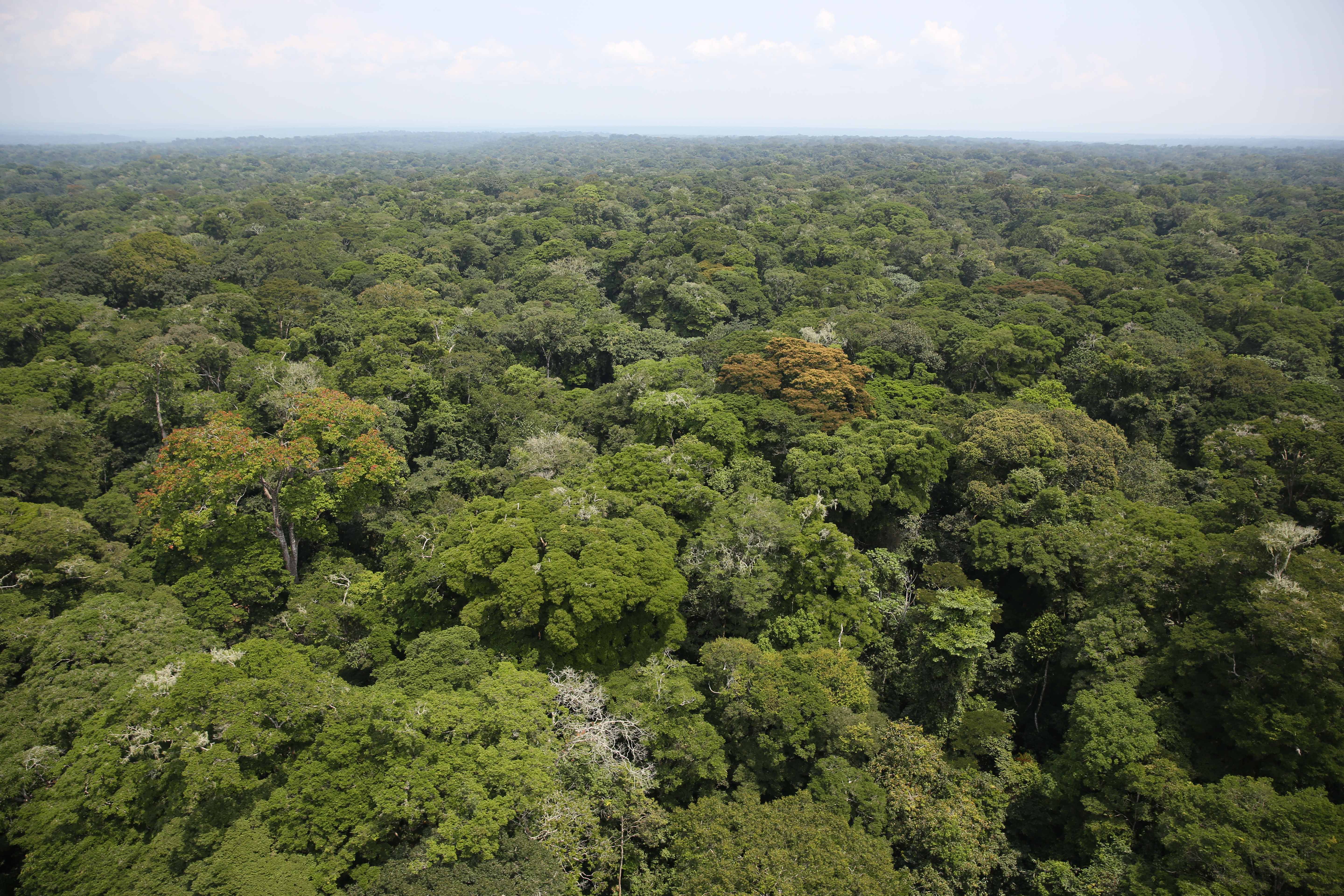 The Congo Basin is the largest forest in Africa. More than 10,000 plant species can be found in and around the forest. The humid forests cover 1.6 million km². At a global level, Congo's forests act as the planet's second lung, counterpart to the rapidly dwindling Amazon. They are a huge "carbon sink," trapping carbon that could otherwise remain carbon dioxide. The Congo Basin holds roughly 8 percent of the world's forest-based carbon. If these woodlands are deforested, the carbon they trap will be released into the atmosphere. It says that 8% of the Earth's forest-based carbon is stored in the RDC's forests. Predictions for future unabated deforestation estimate that by 2050 activities in the Democratic Republic of the Congo, DRC will release roughly the same amount of carbon dioxide as the United Kingdom has emitted over the last 60 years. In 2017, British scientists discovered that peatlands in the Cuvette Centrale, which cover a total of 145,500 sq km, contain 30 billion tonnes of carbon, or 20 years of US fossil fuel emissions. The Congo Basin is an important source of African teak, used for building furniture and flooring. An estimated 40 million people depend on these woodlands, surviving on traditional livelihoods. The Global Forest Atlas estimated that the logging industry covers from 44 to 66 million hectares of forest. A study published in 2019 in ''Nature Sustainability'' showed that 54,000 miles of roads for forest concessions were built between 2003 and 2018, reaching a total of 143,500 miles.

A moratorium on logging in the Congo forest was agreed between the World Bank and the Democratic Republic of the Congo (RDC, République Démocratique du Congo) in May 2002. The World Bank agreed to provide $90 million of development aid to RDC with the provision that the government did not issue any new concessions granting logging companies rights to exploit the forest. The deal also prohibited the renewal of existing concessions. The government has written a new forestry code that requires companies to invest in local development and follow a sustainable, twenty-five-year cycle of rotational logging. When a company is granted a concession from the central government to log in Congo, it must sign an agreement with the local chiefs and hereditary land owners, who give permission for it to extract the trees in return for development packages. In theory, the companies must pay the government nearly $18 million rent a year for these concessions, of which 40% should be returned to provincial governments for investment in social development of the local population in the logged areas. In its current form, the Kyoto Protocol does not reward so-called "avoided deforestation"—initiatives that protect forest from being cut down. But many climate scientists and policymakers hope that negotiations for Kyoto's successor will include such measures. If this were the case, there could be a financial incentive for protecting forests. L’Île Mbiye in Kisangani is part of the Sustainable Forest Management in Africa Symposium project of forest ecosystem conservation conducted by Stellenbosch University. RDC is also looking to expand the area of forest under protection, for which it hopes to secure compensation through emerging markets for forest carbon. The main Congolese environmental organization working to save the forests is an NGO called OCEAN, which serves as the link between international outfits like Greenpeace and local community groups in the concessions. A 2013 study by British scientists showed that deforestation in the Congo Basin rainforest was slowing down.