Cologne Bonn Airport (german: Flughafen Köln/Bonn 'Konrad Adenauer') is the international airport of Germany's fourth-largest city Cologne, and also serves Bonn, former capital of West Germany. With around 12.4 million passengers passing through it in 2017, it is the seventh-largest passenger airport in Germany and the third-largest in terms of cargo operations. By traffic units, which combines cargo and passengers, the airport is in fifth position in Germany. As of March 2015, Cologne Bonn Airport had services to 115 passenger destinations in 35 countries. It is named after Konrad Adenauer, a Cologne native and the first post-war Chancellor of West Germany. The airport is located in the district of Porz and is surrounded by the ''Wahner Heide'' nature reserve. The airport is centrally located in the Cologne Bonn Region southeast of Cologne city centre and northeast of Bonn. Cologne Bonn Airport is one of the country's few 24-hour airports and serves as a hub for Eurowings, FedEx Express and UPS Airlines as well as a focus city for several leisure and low-cost airlines. It is also a host of the German and European space agencies DLR and EAC, part of ESA, which train astronauts there for space explorations. Cologne Bonn airport is only south of larger Düsseldorf Airport, the main airport of Rhine-Ruhr, and also competes with Frankfurt Airport, Germany's major international airport, which can be reached from Cologne within 47 minutes by the ICE high-speed train. The airport is jointly owned by the City of Cologne (31.12%), the Federal Republic of Germany (30.94%), the State of North Rhine-Westphalia (30.94%), the City of Bonn (6.06%) and two counties: Rhein-Sieg-Kreis (0.59%) and Rheinisch-Bergischer Kreis (0.35%).

In 1913, the first plane took off from the Wahner Heide military training area on an artillery reconnaissance flight. In 1939 an airfield was built for the German Luftwaffe. After World War II the British military took over and expanded the airport (as RAF Wahn). A 1,866 m runway was built in this period. In 1951 the airport was opened for civilian air traffic, superseding the former Cologne Butzweilerhof Airport. During the 1950s and 1960s two additional runways and a new passenger terminal were constructed. On 1 November 1970 a Boeing 747 took off for New York City from the airport for the first time. Cologne Bonn Airport was chosen by United Parcel Service (UPS) in 1986 as the location for their European hub. In the late 1990s the airport started an expansion program. Several new parking lots and a second terminal were built, and in 2004 a new long-distance railway station was opened.

Development in the 2000s

Coinciding with the start of several low-cost airlines in Germany, Cologne/Bonn opened new capacities. This enabled the airport to make competitive offers to the airlines. Consequently, Germanwings and TUIfly started operations from Cologne/Bonn as their hub in the fall of 2002. As a result, the number of passengers in 2003 rose by 43% compared to 2002. These airlines were joined by easyJet in late 2003 and Wizz Air in June 2006. Also, the Canadian Forces began to use the airport as a staging area to move troops and supplies in support of humanitarian missions and possible anti-terrorism roles. In 2006 the Brazilian airline BRA provided a twice a week connection to Rio de Janeiro–Galeão, which was discontinued in April 2007 due to problems with the airline. Also in 2006 a daily transatlantic flight to New Jersey's Newark Liberty International Airport by Continental Airlines was established, operating with a Boeing 757-200. This route was discontinued on 4 September 2008 due to a reduction in passenger numbers. Low-cost carriers Ryanair and Norwegian Air Shuttle began service to Cologne/Bonn in May 2012. In April 2014 Ryanair announced the opening of their fifth German base at Cologne/Bonn Airport for October 2014. In December 2014, Lufthansa announced it would base Eurowings' new long-haul operations at Cologne Bonn Airport with flights to Florida, Southern Africa and the Indian Ocean to start by the end of 2015. Meanwhile, Condor cancelled their service to Varadero after only one season due to the expected competition. In February 2018, Eurowings announced the relocation of all long-haul operations from Cologne consisting of four Airbus A330 aircraft to Düsseldorf Airport by late October 2018 leaving the airport without any long-haul passenger routes again.

Cologne Bonn Airport has two passenger terminals which are located directly beside each other:

The older Terminal 1 is a 1970s building that sports large surfaces of bare concrete in its design. It features a u-shaped main building with shops, restaurants, check-in and service facilities and a visitors deck on its roof as well as the star-shaped piers B and C with five aircraft stands each plus a central airside hall between them added in 2004 with joint security-check facilities, more shops and restaurants as well as three additional stands. All ten stands at both piers feature jet bridges while the other three use walk-boarding. Also several bus-boarding stands are available at the apron. Terminal 1 is used by Eurowings, which occupy most of the landside check-in facilities, Lufthansa and Austrian Airlines. Terminal 1 features its own direct connection to the railway station.

Construction of Terminal 2 began in June 1997, and operations at the terminal commenced on 21 June 2000. It is located to the north of Terminal 1. Both feature separate check-in facilities but are connected through a landside walkway. As part of a plan-approval procedure the airport is currently seeking approval for building an airside connection between both terminals. Terminal 2 is a modern-style rectangular building made out of glass and steel which is equipped with eight stands with jet bridges as well as several stands for bus-boarding. It is used by several airlines such as Ryanair and Iran Air. Terminal 2 is also directly connected to the airports' railway station via the basement level. The terminal hosts an interdenominational prayer room on its base level.

The German Air Force's Executive Transport Wing is based on the south-western side of the airport, adjacent to the . The military part of the airport is also used by the Canadian Forces as an operational support hub.

Cologne Bonn Airport is a major cargo hub in the world mainly due to its function as a hub for FedEx Express and UPS Airlines, which operates 140 flights per week at the airport alone. 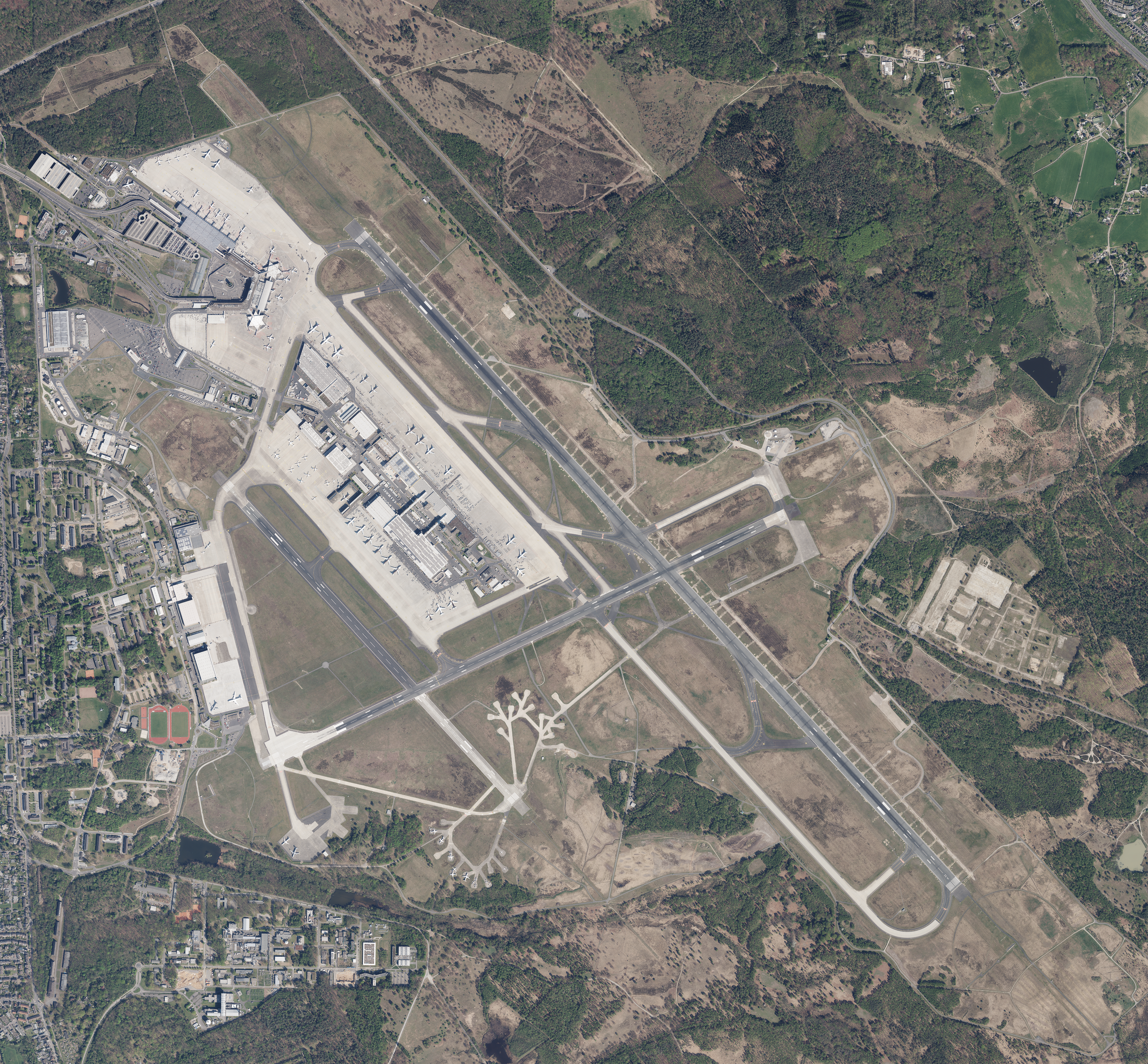 Cologne/Bonn Airport station is a 4-track railway station on a loop off the Cologne–Frankfurt high-speed line that connects Cologne Bonn Airport to long-distance trains at least once an hour per direction, most of them ICE services. The station lies directly across both terminals under a large glass roof and features direct connections to the basement of Terminal 2 as well as the check-in area at Terminal 1-C. The S-Bahn line ''S 19'' to Düren and regional train line ''RE 6'' to Minden (Westfalen) connect the airport station with via Cologne Main Station. ''RB 27'' between Mönchengladbach and Koblenz calls at the airport station as well.

The airport has its own exit (named ''Flughafen'') on motorway A59 which links it to the city centres of Cologne and Bonn as well as the Ruhrgebiet.

Local bus lines also connect the airport with Cologne (route ''161'') and Bonn (route ''SB60''). On 28 October 2015, a new coach terminal opened and is used for remote bus services to other German cities and many other European countries.