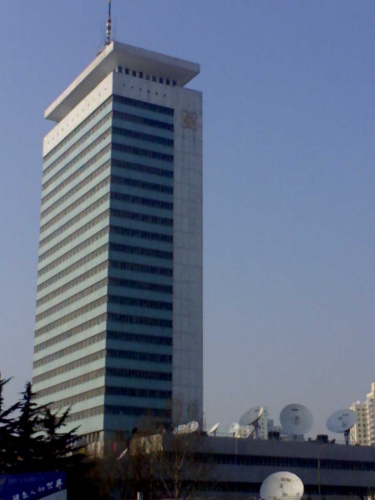 China Central Television (CCTV) is a Chinese state-controlled broadcaster. CCTV has a network of 50 channels broadcasting different programmes and is accessible to more than one billion viewers in six different languages. Most of its programmes are a mixture of news, documentary, social education, comedy, entertainment, and drama, the majority of which consists of Chinese soap operas and entertainment. However, news reporting about topics which are sensitive to the Chinese Communist Party (CCP) is distorted and often used as a weapon against the party's perceived enemies. CCTV was established on 1 May 1958 to be a state-owned news and public opinion steering agency, acting as a mouthpiece of the CCP. CCTV has a variety of functions, such as news communication, social education, culture, and entertainment information services. As a state television station it is responsible to both the Central Committee of the Chinese Communist Party and the State Council. It is the central player in the Chinese government's propaganda network.

In 1954, Communist Party chairman Mao Zedong put forward that China should establish its own TV station. On February 5, 1955, the central broadcasting bureau reported to the State Council and proposed the program of establishing a medium-sized television station, later on premier Zhou Enlai included in China's first five-year plan the planned introduction of television broadcasts. In December 1957, the central broadcasting bureau sent Luo Donghe and Meng Qiyu to the Soviet Union and the German Democratic Republic for the inspection of their TV stations, then the duo returned to Beijing to prepare for the establishment of the promised TV station. At 19:00 on 1 May 1958; Beijing Television (the predecessor of China Central Television) began its test transmissions, and for the first time, Chinese Communist Party's own TV signals were broadcast in Beijing. On the screens of the few dozen television receivers in Beijing that night, a picture of the headquarters building with the words "Beijing TV station" written on it appeared. On September 2 of that year, BTV broadcast officially for the first time. Later the number of official TV programs increased from twice a week to four times a week (on Tuesday, Thursday, Saturday and Sunday). From 1 January 1960; BTV changed the fixed program schedule and started to broadcast eight times a week and added one program on Sunday morning. BTV also set up a dozen fixed TV shows in order to cater to the vast audiences, the shows include news columns and entertainment shows. The media function of TV had extended further. In May of the same year, the construction of the "new building" in the courtyard of the headquarters was completed. Due to increasing demands, it soon launched its second channel in 1963 and third channel in 1969, followed by the first simultaneous satellite broadcasts nationwide in 1972. Starting from 1 May 1973, Beijing Television began broadcasting experimentally in color on its second channel every Tuesday, Thursday, and Saturday using the PAL-D system, and fully converted to color broadcasting by 1977. On January 1, 1978; its flagship news broadcasts were officially launched. On May 1 of the same year, with the approval of the CCP Central Committee, BTV, which celebrated its 20th anniversary was officially renamed CCTV (China Central Television, 中央电视台) and a new logomark debuted. In 1979, the iconic butterfly logo made its debut, which would be used as the corporate identity of the CCTV network for the next two decades. Until the late 1970s, CCTV held only evening broadcasts, usually closing down at midnight. During the summer and winter academic vacations, it occasionally transmitted daytime programming for students, while special daytime programs were aired during national holidays. In 1980 CCTV experimented with news relays from local and central television studios via microwave. By 1985, CCTV had already become a leading television network in China. In 1987 CCTV's popularity soared due to the adaptation and presentation of ''Dream of the Red Chamber''. The 36-episode TV series—the first Chinese television drama to enter the global market— still remains popular in the international market. In the same year, CCTV exported 10,216 programmes to 77 foreign television stations.