The Supreme Court of California is the highest and final court in the courts of the U.S. state of California. It resides primarily in San Francisco at the Earl Warren Building, but it regularly holds sessions in Los Angeles and Sacramento. Its decisions are binding on all other California state courts. Since 1850, the court has issued many influential decisions in a variety of areas including torts, property, civil and constitutional rights, and criminal law.

Under the original 1849 California Constitution, the Court started with a chief justice and two associate justices. The Court was expanded to five justices in 1862. Under the current 1879 constitution, the Court expanded to six associate justices and one chief justice, for the current total of seven. The justices are appointed by the Governor of California and are subject to retention elections. According to the California Constitution, to be considered for appointment, as with any California judge, a person must be an attorney admitted to practice in California or have served as a judge of a California court for 10 years immediately preceding the appointment. To fill a vacant position, the Governor must first submit a candidate's name to the Commission on Judicial Nominees Evaluation of the State Bar of California, which prepares and returns a thorough, confidential evaluation of the candidate. Next, the Governor officially nominates the candidate, who must then be evaluated by the Commission on Judicial Appointments, which consists of the Chief Justice of California, the Attorney General of California, and a senior presiding justice of the California Courts of Appeal. The Commission holds a public hearing and if satisfied with the nominee's qualifications, confirms the nomination. The nominee can then immediately fill an existing vacancy, or replace a departing justice at the beginning of the next judicial term. If a nominee is confirmed to fill a vacancy that arose partway through a judicial term, the justice must stand for retention during the next gubernatorial election. Voters then determine whether to retain the justice for the remainder of the judicial term. At the term's conclusion, justices must again undergo a statewide retention election for a full 12-year term. If a majority votes "no," the seat becomes vacant and may be filled by the Governor. The electorate has occasionally exercised the power not to retain justices. Chief Justice Rose Bird and Associate Justices Cruz Reynoso and Joseph Grodin were staunchly opposed to capital punishment and were subsequently removed in the 1986 general election. Newly reelected Governor George Deukmejian was then able to elevate Associate Justice Malcolm M. Lucas to Chief Justice and appoint three new associate justices (one to replace Lucas in his old post and two to replace Reynoso and Grodin).

Five current justices were appointed by Democrats (Liu, Cuéllar, Kruger, Groban, Jenkins) and two by Republicans (Cantil-Sakauye and Corrigan). The justices generally do not publicly discuss their political views or affiliations; however, in December 2018, Chief Justice Cantil-Sakauye announced that she was leaving the Republican Party. One justice earned an undergraduate degree from a University of California school (Cantil-Sakauye at Davis), four from private universities in California (Corrigan at Holy Names, Liu and Groban at Stanford, and Jenkins at Santa Clara), and two from an out-of-state private university (Cuéllar and Kruger at Harvard). Two justices earned their law degrees from a University of California law school (Cantil-Sakauye at Davis and Corrigan at Hastings), one from a private California university (Jenkins at the University of San Francisco), and four from law schools at out-of-state private universities (Liu, Cuéllar, and Kruger at Yale and Groban at Harvard). The most recent Justice to leave the court was Justice Ming Chin who retired from the court on August 31, 2020. Appointed by Republican Governor Pete Wilson, Chin was the first Asian American man, the first Chinese American person, and second Asian American person to serve on the court. The most recent addition to the court is Associate Justice Martin Jenkins, who was sworn in on December 4, 2020, to replace Chin on the court. Appointed by Democratic Governor Gavin Newsom, Jenkins is the first openly gay justice, the third African American man, and the fifth African American person to serve on the court. There is one Filipino-American justice (Cantil-Sakauye), one Hispanic (Cuéllar), two African-American (Kruger, Jenkins), one East Asian-American justice (Liu), and two non-Hispanic white justices (Corrigan, Groban). The court had a female majority from 2011–2017. The majority was achieved in 2011 after Republican Governor Arnold Schwarzenegger appointed Chief Justice Tani Cantil-Sakauye to the court, joining Justice Joyce L. Kennard (an appointee of Republican Governor George Deukmejian), Justice Kathryn Werdegar (appointed by Republican Governor Pete Wilson), and Justice Carol A. Corrigan (another Schwarzenegger appointee). When Kennard retired in 2014, Democratic Governor Jerry Brown preserved the female majority by appointing Leondra Kruger to succeed her. The female majority ended when Werdegar retired in 2017, and Brown appointed Joshua Groban to succeed her.

Between 1879 and 1966, the court was divided into two three-justice panels, Department One and Department Two. The chief justice divided cases evenly between the panels and also decided which cases would be heard ''en banc'' by the Court sitting as a whole. 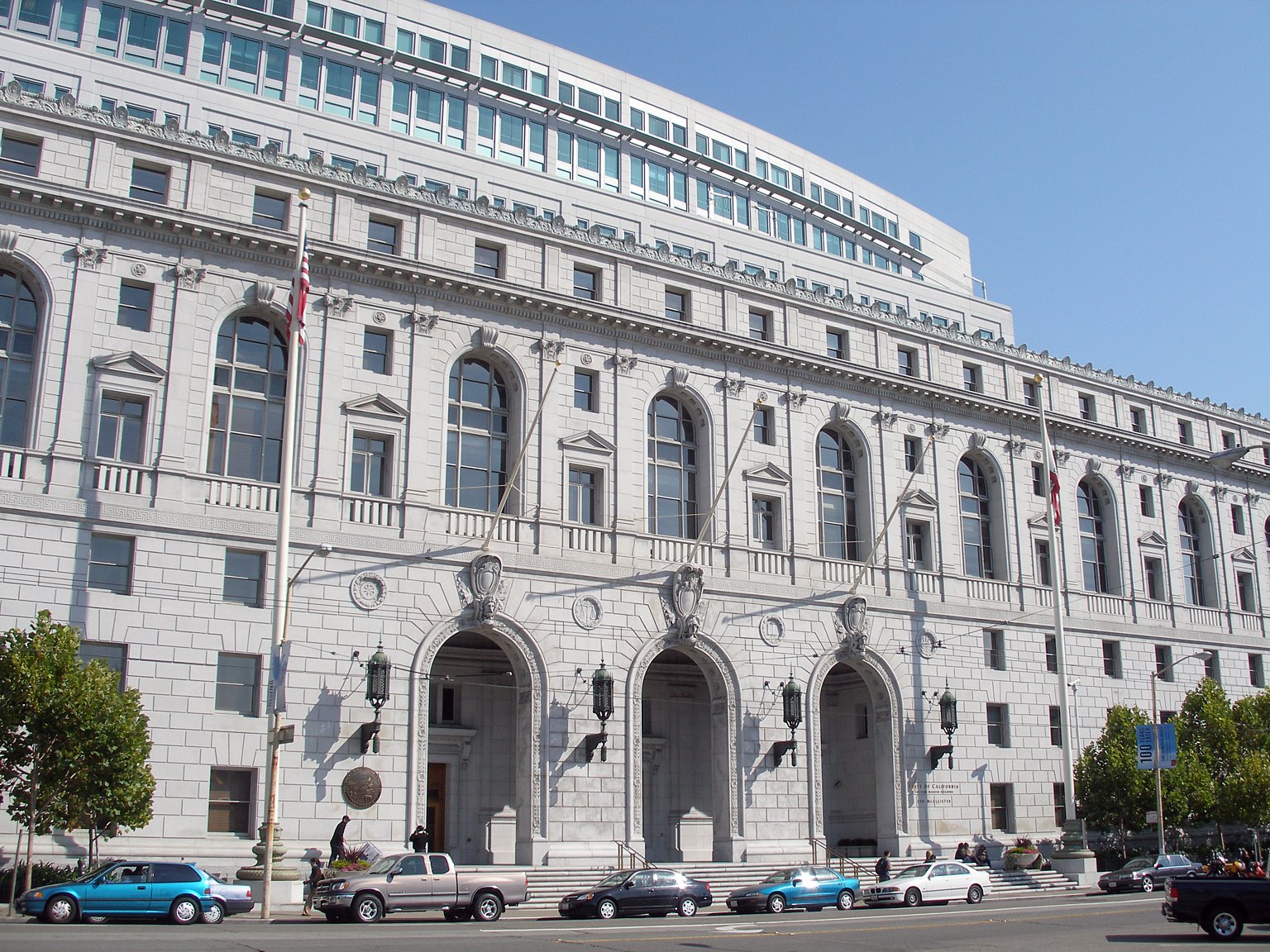 After a constitutional amendment in 1966, the Court currently sits "in bank" (en banc) (all seven together) when hearing all appeals. When there is an open seat on the court, or if a justice recuses himself or herself on a given case, justices from the California Courts of Appeal are assigned by the chief justice to join the court for individual cases on a rotational basis. The procedure for when all justices recuse themselves from a case has varied over time. For a 1992 case, the chief justice requested the presiding justice of a Court of Appeal district (different from the one where the case originated) to select six other Court of Appeal justices from his district, and they formed an acting Supreme Court for the purpose of deciding that one case. However, in a later case where all members of the Court recused themselves when Governor Schwarzenegger sought a writ of mandate (''Schwarzenegger v. Court of Appeal (Epstein)''), seven justices of the Courts of Appeal were selected based on the regular rotational basis, not from the same district, with the most senior one serving as the acting chief justice, and that acting supreme court eventually denied the writ petition. In a yet more recent case (''Mallano v. Chiang'') where all members of the Court recused themselves on a petition for review by retired Court of Appeal justices on a matter involving those justices' salaries (that apparently involved matters up to and including the 2016–2017 fiscal year), the Court ordered that six superior court judges be selected from the pool that took office after July 1, 2017 to serve as the substitute justices for the six sitting justices, with the senior judge among that group serving as the acting Chief Justice; that acting Supreme Court eventually denied the petition for review.

The Constitution of California gives the Court mandatory and exclusive appellate jurisdiction in all cases imposing capital punishment in California, although the Court has sponsored a state constitutional amendment to allow it to assign death penalty appeals to the California Courts of Appeal. The Court has discretionary appellate jurisdiction over all cases reviewed by the Courts of Appeal; the latter were created by a 1904 constitutional amendment to relieve the Supreme Court of most of its workload so the Court could then focus on dealing with non-frivolous appeals that involved important issues of law. According to research by Justice Goodwin Liu, each year the Court has averaged 5,200 petitions for writs of certiorari and 3,400 petitions for habeas corpus, plus 40 additional petitions from inmates already on death row. In an average year the Court will decide to hear 83 cases and will be required to hear appeals from 20 new inmates joining death row.