Burkitt lymphoma is a cancer of the lymphatic system, particularly B lymphocytes found in the germinal center. It is named after Denis Parsons Burkitt, the Irish surgeon who first described the disease in 1958 while working in equatorial Africa. The overall cure rate for Burkitt lymphoma in developed countries is about 90%, but worse in low-income countries. Burkitt lymphoma is uncommon in adults, in whom it has a worse prognosis.

Picture of a mouth of a patient with Burkitt lymphoma showing disruption of teeth and partial obstruction of airway Burkitt lymphoma can be divided into three main clinical variants: the endemic, the sporadic, and the immunodeficiency-associated variants. * The endemic variant (also called "African variant") most commonly occurs in children living in malaria endemic regions of the world (e.g., equatorial Africa, Brazil, and Papua New Guinea). Epstein–Barr virus (EBV) infection is found in nearly all patients. Chronic malaria is believed to reduce resistance to EBV, allowing it to take hold. The disease characteristically involves the jaw or other facial bone, distal ileum, cecum, ovaries, kidney, or breast. * The sporadic type of Burkitt lymphoma (also known as "non-African") is the most common variant found in places where malaria is not holoendemic. The tumor cells have a similar appearance to the cancer cells of classical endemic Burkitt lymphoma. Sporadic lymphomas are rarely associated with the Epstein–Barr virus. Non-Hodgkin lymphoma, which includes Burkitt, accounts for 30–50% of childhood lymphoma. The jaw is less commonly involved, compared to the endemic variant. The ileocecal region is the common site of involvement. * Immunodeficiency-associated Burkitt lymphoma is usually associated with HIV infection or occurs in the setting of post-transplant patients who are taking immunosuppressive drugs. Burkitt lymphoma can be one of the diseases associated with the initial manifestation of AIDS. By morphology (i.e., microscopic appearance) or immunophenotype, it is almost impossible to differentiate these three clinical variants. Immunodeficiency-associated Burkitt lymphoma may demonstrate more plasmacytic appearance or more pleomorphism, but these features are not specific. Burkitt lymphoma is commonly associated with the infection of B cell lymphocytes with the Epstein–Barr virus (EBV) and in these cases in considered to be one form of the Epstein–Barr virus-associated lymphoproliferative diseases. The epidemic variant of Burkitt lymphoma (eBL) is in almost all cases associated with EBV infection. However, the sporadic variant, which afflicts ~1,200 individuals/year in the US, is associated with the virus in only 10-15% of cases. The immunodeficiency-associated variant of Burkitt lymphoma strikes 30-40% of individuals with HIV-induced AIDS and rare cases of patients who received a bone marrow or other organ transplant; in the latter cases, individuals have almost always received intensive chemotherapy and therefore are immunodeficient. About 30% of individuals with the immunodeficiency variant are infected with EBV. The fact that some Burkitt lymphoma cases do not involve EBV allows that many cases of the disease are not caused and/or promoted by EBV, i.e. the virus may be an innocent passenger virus in these cases. However, the almost ubiquitous presence of the virus in the epidemic variant of Burkitt's lymphoma suggests that it contributes to the development and/or progression of this variant. The mutational landscape in BL has recently been found to differ between tumors with and without EBV infection, further strengthening the role of the virus in lymphomagenesis. 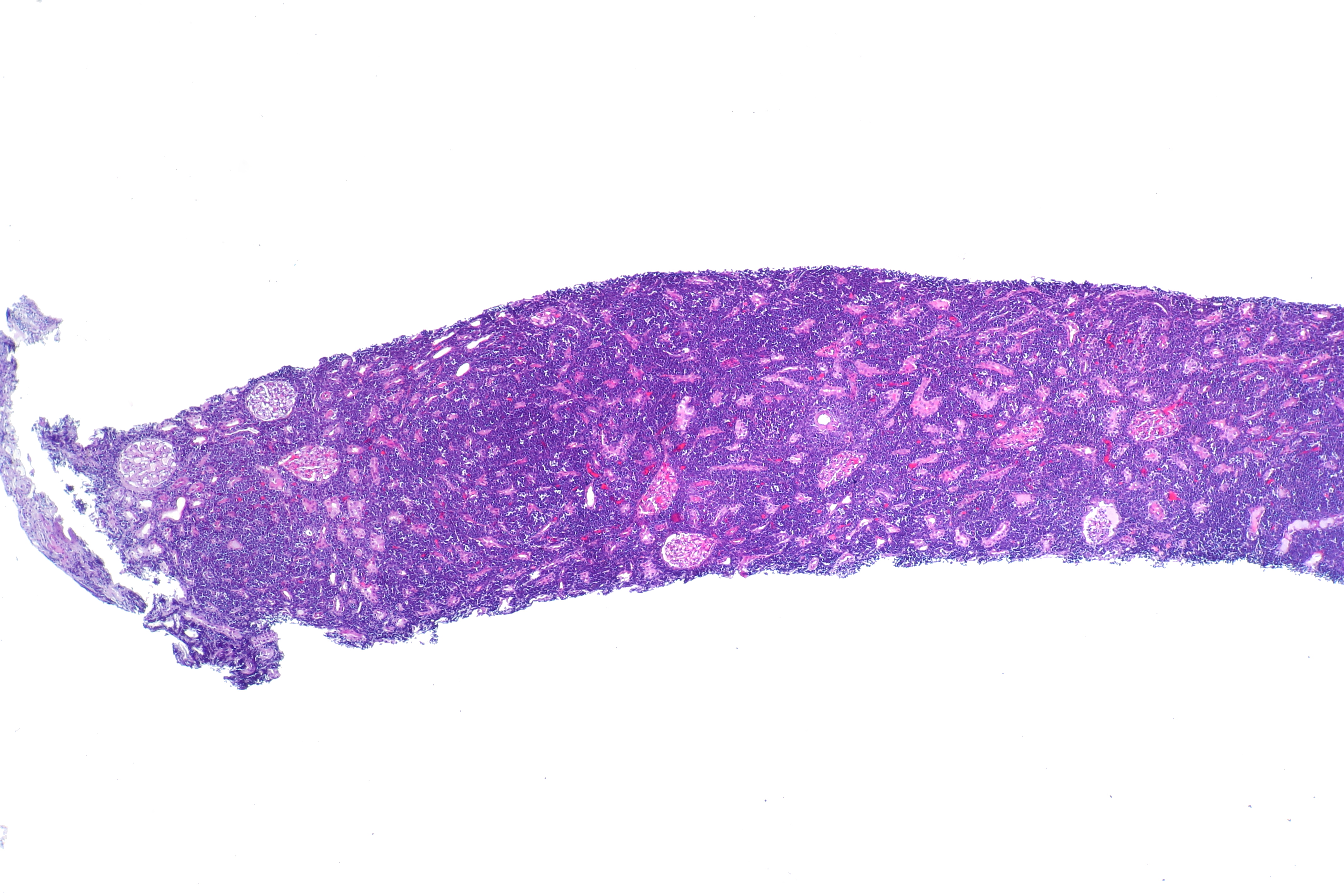 It was described that short non-coding RNAs named microRNAs (miRNAs) have important functions in lymphoma biology. In malignant B cells, miRNAs participate in pathways fundamental to B cell development, like B cell receptor (BCR) signalling, B cell migration/adhesion, cell-cell interactions in immune niches, and the production and class-switching of immunoglobulins.

Normal B cells of a germinal center possess rearranged immunoglobulin heavy and light chain genes, and each isolated B cell possesses a unique IgH gene rearrangement. Since Burkitt lymphoma and other B-cell lymphomas are a clonal proliferative process, all tumor cells from one patient are supposed to possess identical IgH genes. When the DNA of tumor cells is analyzed using electrophoresis, a clonal band can be demonstrated, since identical IgH genes will move to the same position. On the contrary, when a normal or reactive lymph node is analyzed using the same technique, a smear rather than a distinct band will be seen. This technique is useful since sometimes benign reactive processes (e.g. infectious mononucleosis) and malignant lymphoma can be difficult to distinguish.

In general, the first line of treatment for Burkitt lymphoma is intensive chemotherapy. A few of these regimens are: the GMALL-B-ALL/NHL2002 protocol, the modified Magrath regimen (R-CODOX-M/IVAC). COPADM, hyper-CVAD, and the Cancer and Leukemia Group B (CALGB) 8811 regimen;