A bride is a woman who is about to be married or who is newlywed. When marrying, the bride's future spouse, (if male) is usually referred to as the ''bridegroom'' or ''groom''. In Western culture, a bride may be attended by a maid of honor, bridesman and one or more bridesmaids.

The word, possibly, comes from the Old English 'bryd', which in turn is derived from the Proto-Germanic verb root *brū-, meaning 'to cook, brew, or make a broth,' which was the role of the daughter-in-law in primitive families.

left|In the early 20th century, sometimes even later as here in 1926, it was not uncommon to see a bride wearing a darker-colored dress.|256x256px 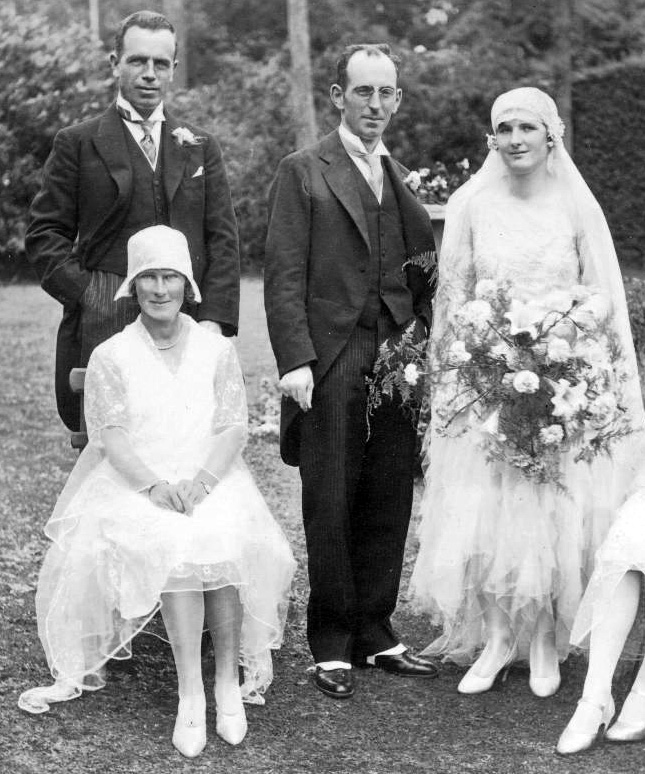 In Europe and North America, the typical attire for a bride is a formal dress and a veil. Usually, in the "white wedding" model, the bride's dress is bought specifically for the wedding, and is not in a style that could be worn for any subsequent events. Previously, until at least the middle of the 19th century, the bride generally wore her best dress, whatever color it was, or if the bride was well-off, she ordered a new dress in her favorite color and expected to wear it again. For first marriages in Western countries, a white wedding dress is usually worn, a tradition started by Queen Victoria, who wore a white court dress for her wedding. Through the earlier parts of the 20th century, Western etiquette prescribed that a white dress should not be worn for subsequent marriages, since the wearing of white was mistakenly regarded by some as an ancient symbol of virginity, despite the fact that wearing white is a fairly recent development in wedding traditions, and its origin has more to do with conspicuous consumption from an era when a white dress was luxurious, even prodigal, because of difficulties with laundering delicate clothes. Today, Western brides frequently wear white, cream, or ivory dresses for any number of marriages; the color of the dress is not a comment on the bride's sexual history. Outside of Western countries, brides most commonly wear national dress. White wedding dresses are particularly uncommon in Asian traditions, because white is the color of mourning and death in those cultures. In many Asian cultures, red is usual for brides, as this colour indicates vibrance and health and has over time been associated with brides. However, in modern times other colours may be worn, or Western styles preferred. Regardless of colour in most Asian cultures bridal clothes are highly decorative, often covered with embroidery, beading or gold. In some traditions brides may wear more than one outfit, this is true for example in Japan, parts of India, and, archaically, in parts of the Arab world. Particular styles of jewelry are often associated with bridal wear, for example wedding rings in most Western cultures, or chura (red and white bangles) in Punjabi Sikh culture. Hindu brides are presented with a mangalsutra during the wedding ceremony, which has much of the same significance as a wedding ring in other parts of the world. Wedding jewellery has traditionally been used to demonstrate the value of the bride's dowry. In addition to the gown, brides often wear a veil and carry a bouquet of flowers, a small heirloom such as a lucky coin, a prayer book, or other token. In Western countries, a bride may wear "something old, something new, something borrowed, and something blue"; a bridal purse (or money bag) is also common.

The term ''bride'' appears in combination with many words, some of which are obsolete. Thus "bridegroom" is a newly married man, and "bride-bell," "bride-banquet" are old equivalents of wedding-bells, wedding-breakfast. "Bridal" (from ''Bride-ale''), originally the wedding-feast itself, has grown into a general descriptive adjective, the ''bridal'' ceremony. The ''bride-cake'' had its origin in the Roman ''confarreatio'', an upper-class form of marriage, the essential features of whose ceremony were the eating by the couple of a cake made of salt, water and spelt flour, and the holding by the bride of three wheat-ears, a symbol of plenty. The cake-eating went out of fashion, but the wheat ears survived. In the Middle Ages they were either worn or carried by the bride. Eventually it became the custom for the young girls to assemble outside the church porch and throw grains of wheat over the bride, and afterwards a scramble for the grains took place. In time the wheat-grains came to be cooked into thin dry biscuits, which were broken over the bride's head, as is the custom in Scotland today, an oatmeal cake being used. In Elizabeth's reign these biscuits began to take the form of small rectangular cakes made of eggs, milk, sugar, currants and spices. Every wedding guest had one at least, and the whole collection were thrown at the bride the instant she crossed the threshold. Those that lighted on her head or shoulders were most prized by the scramblers. At last these cakes became amalgamated into a large one that took on its full glories of almond paste and ornaments during Charles II's time. But even today in rural parishes, e.g. north Notts, wheat is thrown over the bridal couple with the cry "Bread for life and pudding for ever," expressive of a wish that the newly wed may be always affluent. The throwing of rice, a very ancient custom but one later than the wheat, is symbolical of the wish that the bridal may be fruitful. The ''bride-cup'' was the bowl or loving-cup in which the bridegroom pledged the bride, and she him. The custom of breaking this wine-cup, after the bridal couple had drained its contents, is common to both the Greek Christians and members of the Jewish faith. It is thrown against a wall or trodden under foot. The phrase "bride-cup" was also sometimes used of the bowl of spiced wine prepared at night for the bridal couple. ''Bride-favours'', anciently called bride-lace, were at first pieces of gold, silk or other lace, used to bind up the sprigs of rosemary formerly worn at weddings. These took later the form of bunches of ribbons, which were at last metamorphosed into rosettes.

The ''bride-wain'', the wagon in which the bride was driven to her new home, gave its name to the weddings of any poor deserving couple, who drove a "wain" round the village, collecting small sums of money or articles of furniture towards their housekeeping. These were called bidding-weddings, or bid-ales, which were in the nature of "benefit" feasts. So general is still the custom of "bidding-weddings" in Wales, that printers usually keep the form of invitation in type. Sometimes as many as six hundred couples will walk in the bridal procession. The ''bride's wreath'' is a Christian substitute for the gilt coronet all Jewish brides wore. The crowning of the bride is still observed by the Russians, and the Calvinists of Holland and Switzerland. The wearing of orange blossoms is said to have started with the Saracens, who regarded them as emblems of fecundity. It was introduced into Europe by the Crusaders. The ''bride's veil'' is the modern form of the ''flammeum'' or large yellow veil that completely enveloped the Greek and Roman brides during the ceremony. Such a covering is still in use among the Jews and the Persians. The "bride's crate" was the bride's container to gather all the things for the wedding in Hungary. Once all the underwear and clothes were finished, the girl was ready for marriage.

In Christianity, bride, the Lamb's wife, or the Bride of Christ, is a term that generally describes the Church (followers of Christ) spiritually betrothed to Jesus Christ. The term is found in related verses in the Bible that describe a woman, in the Gospels, the Book of Revelation, the Epistles and related verses in the Old Testament. Sometimes, the Bride is implied by calling Jesus a Bridegroom to the Church. For over 1500 years, the Church was identified as the bride betrothed to Christ. However, there are instances of the interpretation of the usage of varying from church to church. Most believe that it always refers to the church.