In
gridiron football Gridiron football,
, blitzing is a tactic used by the
defense Defense or defence may refer to: Tactical, martial, and political acts or groups * Defense (military) A military, also known collectively as armed forces, is a heavily armed, highly organized force primarily intended for warfare. It is ty ...
to disrupt pass attempts by the offense. During a blitz, a higher than usual number of defensive players will
rush Rush(es) may refer to: Places United States * Rush, Colorado * Rush, Kentucky * Rush, New York * Rush City, Minnesota * Rush Creek (Kishwaukee River tributary), Illinois * Rush Creek (Marin County, California), a stream * Rush Creek (Mono County, ...
the opposing
quarterback The quarterback (commonly abbreviated "QB"), colloquially known as the "signal caller", is a position in gridiron football Gridiron football,
, in an attempt either to tackle him or force him to hurry his pass attempt. In practice, a blitz involves five or more players rushing during a single
down Down most often refers to: * Down, the relative direction opposed to up * Down (gridiron football), in American/Canadian football, a period when one play takes place * Down feather, a soft bird feather used in bedding and clothing * Downland, a typ ...
, rather than the four rushers used during normal play. For example, in a defense that normally uses four
defensive linemen 350px, A diagram of the linemen, with defensive linemen (in 4-3 formation) in red and offensive linemen in green. In gridiron football Gridiron football,
s or
defensive back In gridiron football Gridiron football,
s. Blitzing is a higher-risk strategy, as fewer defensive players are left to cover receivers or to defend against running plays. However, a successful blitz will result in a sack or will force the quarterback into making an error.

The blitz began with the "red-dog", likely first done by Red Ettinger a linebacker for the University of
Kansas Kansas () is a U.S. state, state in the Midwestern United States, Midwestern United States. Its Capital city, capital is Topeka and its largest city is Wichita, Kansas, Wichita. Kansas is a landlocked state bordered by Nebraska to the north; ...
, sometime between 1948–1950. The term "red-dog" referred to a rushing
linebacker A linebacker (LB or backer) is a playing position in gridiron football. Linebackers are members of the defensive team, and line up approximately three to five yards (4 m) behind the line of scrimmage and behind the defensive linemen. They re ... 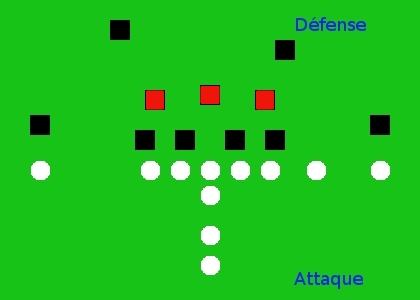 that created a six-on-five matchup against the offensive line; and blitz meant rushing seven, thereby leaving one potential receiver uncovered. The term "red-dog" is at least as old as 1959. Defensive coordinator Chuck Drulis is widely credited with inventing the safety blitz in 1960.
Bill Arnsparger William Stephen Arnsparger (December 16, 1926 – July 17, 2015) was an American college and professional football Football is a family of team sport A team is a roup_(disambiguation),_group_of_individuals_(human_or_non-human)_working_to_...
_is_the_likely_creator_of_the_zone_blitz.