The beluga , also known as the beluga sturgeon or great sturgeon (''Huso huso'') is a species of anadromous fish in the sturgeon family (Acipenseridae) of order Acipenseriformes. It is found primarily in the Caspian and Black Sea basins, and formerly in the Adriatic Sea. Going on maximum size, it is the third most massive living species of bony fish. Heavily fished for the female's valuable roe, known as beluga caviar, wild populations have been greatly reduced by overfishing and poaching.

The common name for the sturgeon, as for the unrelated beluga whale, is derived from the Russian word белый (''belyj''), meaning "white", probably referring to the extensive pale colour on the flanks and belly in beluga compared to other sturgeons. 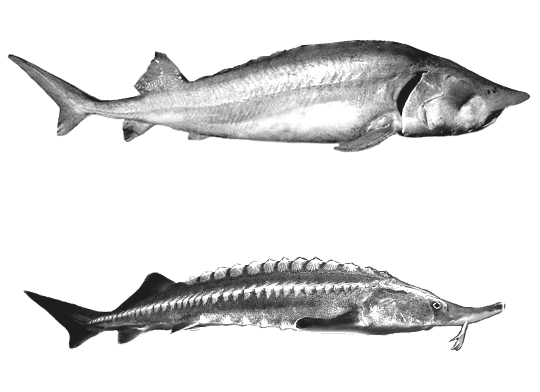 ''Huso huso'' shows typical characteristics of sturgeons, i.e., elongated body, heterocercal tail, partially cartilaginous skeleton, naked skin, longitudinal series of scutes.
The dorsal fin has 48 to 81 soft rays, the anal fin, much shorter, has 22 to 41 soft rays. The series of longitudinal scutes are five: dorsal (1 series, 9-17 scutes), lateral (2 series, one per side, 28-60 scutes each) and ventral series (2 series, one per side, 7-14 scutes each). The surface of the skin is covered by fine denticles. The rostrum is conical and contains numerous sensory pits on both ventral and dorsal surfaces. Large, crescent shaped mouth, protractile, with the upper lip continuous while lower lip is interrupted by a large gap. The barbels are laterally compressed with foliate appendages, arranged in two pairs, originating midway or closer to the mouth than the tip of the snout. However, during the growth Beluga sturgeon shows evident morphologic changes: * juveniles are slender, head is quite narrow with a mouth ventrally placed but projecting upward, snout is thin and pointed (almost 1/2 of the head), scutes are evident, back and flancs are dark grey or black, and belly is white; * Adult are heavy-set, spindle-shaped but large individuals are humpbacked, head is massive with a very large protractil mouth which gradually moves in an almost frontal position during the growth, snout is quite short (1/3 to 1/4 of the head), scutes gradually undergo absorption and decrease in number with age, colouring is blue gray or dark brown with silver or gray flancs and white belly, dark dorsum contrasts strongly against the rest of the body; * Very old specimens are stocky, with an impressive head and an enormous mouth.

Among all extant bony fishes, Beluga sturgeon may be considered a rival to the ocean sunfish (''Mola'' sp.) as the most massive fish, the second longest fish after the giant oarfish (''Regalecus glesne''), as well as the largest freshwater fish in the world. The beluga also rivals the great white shark (''Carcharodon carcharias'') and the greenland shark (''Somniosus microcephalus'') for the title of largest actively predatory fish.