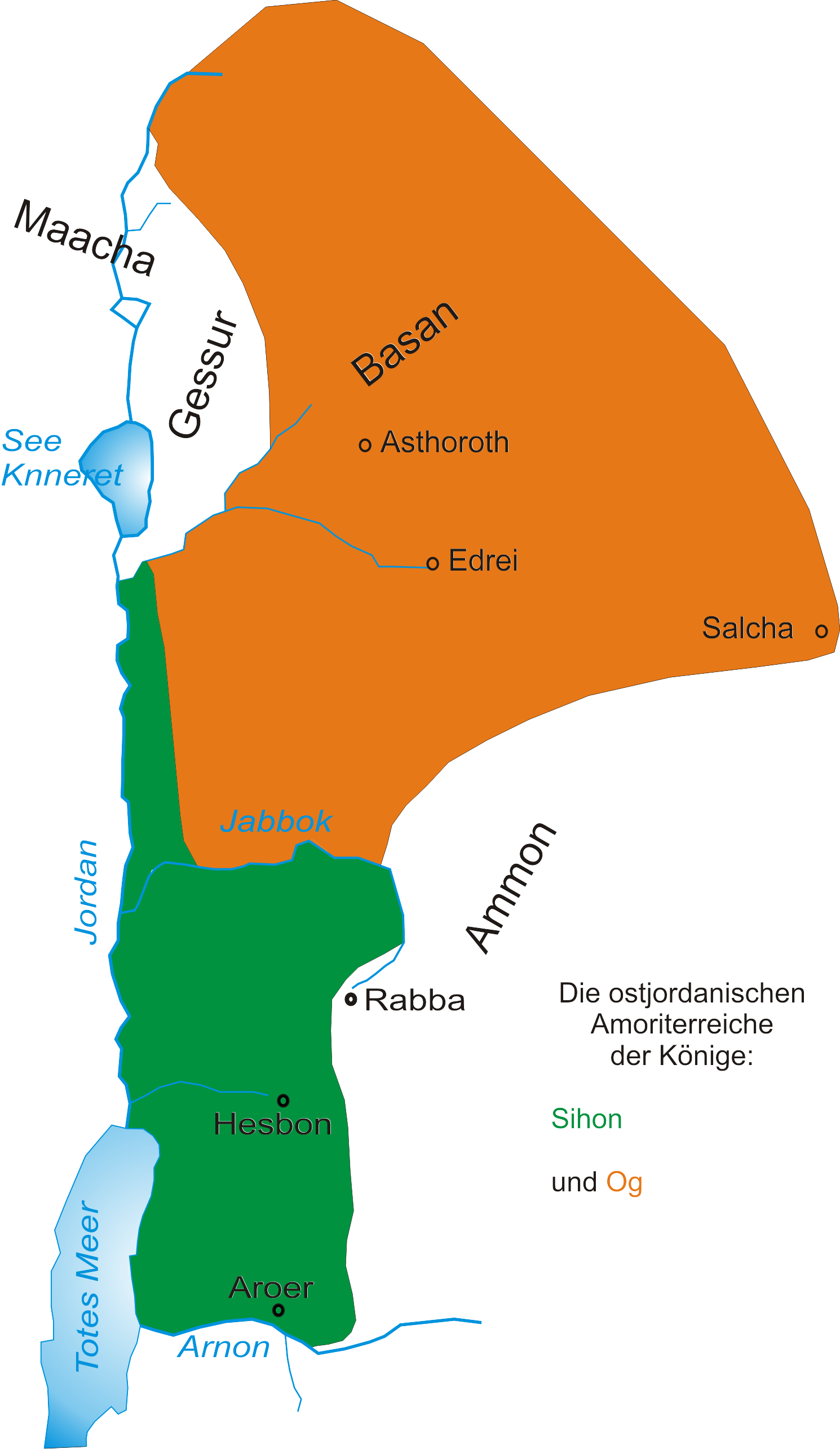 Bashan (; he|הַבָּשָׁן, ''ha-Bashan''; la|Basan or ''Basanitis'') is a term for the northernmost region of the Transjordan, which is located in what is today known as Syria. The Hebrew Bible first mentions it in , where Og the king of Bashan came out against the Israelites at the time of their entrance into the Promised Land, but was vanquished in battle (; ). Along with the half of Gilead it was given to the half-tribe of Manasseh (). According to the book of Joshua, Golan, one of its cities, became a Levitical city and a city of refuge (). According to the Torah, the Israelites invaded Bashan and conquered it from the Amorites. states:

Then we turned, and went up the way to Bashan: and Og the king of Bashan came out against us, he and all his people, to battle at Edrei. And the said unto me, Fear him not: for I will deliver him, and all his people, and his land, into thy hand; and thou shalt do unto him as thou didst unto Sihon king of the Amorites, which dwelt at Heshbon. So the our God delivered into our hands Og also, the king of Bashan, and all his people: and we smote him until none was left to him remaining. And we took all his cities at that time, there was not a city which we took not from them, threescore cities, all the region of Argob, the kingdom of Og in Bashan. All these cities were fenced with high walls, gates, and bars; beside unwalled towns a great many. And we utterly destroyed them, as we did unto Sihon king of Heshbon, utterly destroying the men, women, and children, of every city. But all the cattle, and the spoil of the cities, we took for a prey to ourselves.

Argob, in Bashan, was one of Solomon's commissariat districts (). The cities of Bashan were taken by Hazael (), but were soon after reconquered by Jehoash (), who overcame the Syrians in three battles, according to the prophecy of Elisha (). From this time, Bashan almost disappears from history, although we read about the wild cattle of its rich pastures (; ), the oaks of its forests (; ; ), the beauty of its extensive plains (; ), and the rugged majesty of its mountains (). Soon after the conquest, the name "Gilead" was given to the whole country beyond Jordan.