Australian rules football is a rapidly growing sport in Canada. Australian football is currently played in six Canadian provinces - Ontario, Alberta, Nova Scotia, Newfoundland and Labrador, Quebec and British Columbia. Saskatchewan is in the formative stages of development. The Ontario league, centred on Toronto but also including sides from cities as far afield as Guelph, Hamilton and Ottawa, is considered the largest league outside Australia. In western Canada, there are clubs in Edmonton, Calgary and a six-team league in the Vancouver area. There is also a number of junior and women's clubs across Canada. This has increased dramatically after the introduction of the Aussie x program in Ontario and Vancouver. Also the performance of Canadian Mike Pyke in the 2012 AFL Grand Final has brought added publicity to the game of Australian Football in Canada.

The Canadian Australian Football League was established in May 1989 when two clubs, the Mississauga Mustangs and the Toronto Panthers, were formed and played in the inaugural Conacher Cup game in Toronto, Ontario. Since then, the game of Australian football in Canada has expanded considerably nationwide. In 1990, the Scarborough Rebels, the North York Hawks and the Hamilton Wildcats joined, with the Balmy Beach Saints coming on board in 1992. The North York Hawks later relocated and became known as the Broadview Hawks. The Brampton Wolverines, the league's seventh team, were formed in 1993. The Scarborough Rebels relocated and became the Lawrence Park Rebels. 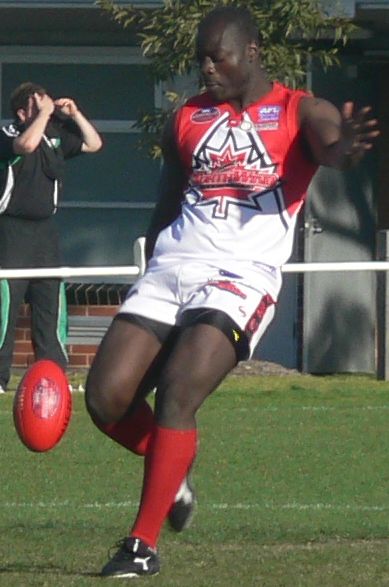 In 1993, a Canadian representative team, known as the Northwind, beat a British (BARFL) representative team. In 1994 and 1995, the Canadians again defeated the British at home. In 1995, several local CAFA games were broadcast on a Hamilton cable television channel. In July 1995, the Hamilton Wildcats played a Canadian All-Star team in front of 21,000 fans during the half-time break at a Canadian Football League (gridiron) match. In 1999, the first USA v Canada game was played (49th Parallel Cup, named after the 49th parallel north). The Revolution narrowly defeated Team Canada (Northwind). Later matches enforced strict rules based on player origins. The 49th Parallel Cup is held every two years. In 2002, Canada participated in the inaugural Australian Football International Cup, with Canada represented by the Northwind team consisting purely of Canadian-born players. The Canadian national team has competed in every International Cup since its inception and now competes with its national women's team named the Northern Lights.

In 2003, the first junior league in Canada, the North Delta Junior Australian Football League, was formed. AFL Canada was formed as governing body on 30 July 2004, when the Canadian Australian Football League changed its official name. The move corresponded with funding from the Australian Football League, and a junior participation program was put in place. The clubs were split into two regional leagues, the Ontario Australian Football League and the North West Pacific Football League. The remaining Alberta-based clubs participate in AFL Canada organised regional conferences such as the British Columbia Cup. In 2005, the Northwind participated in the 2005 International Cup. In early 2006, AFL Canada sent a small delegation to the AFL exhibition match in Los Angeles. London and Windsor folded due to distance but the new OAFL club, the Central Blues, formed and began competing. In Alberta, the Calgary Bears also formed and the Westcoast challenge commenced. In early 2007, the Ottawa Swans formed, and affiliated with the OAFL, and the Demons relocated from Mississauga to High Park in Toronto. In late 2007, AFL Canada hosted the Ironbark challenge, including the 49th Parallel Cup between Canada vs United States, including historic first women's and junior (under 17) tests between the two countries. Canada defeated the United States for the first time at both senior and junior level, but were soundly defeated in the women's match. The tournament also included a touring Japanese team and attracted a record attendance of 2,500 at Thunderbird Stadium in Vancouver.

In early 2008, Canadian junior Scott Fleming moved to Australia to play with the Broadbeach Cats semi-professional club in the AFL Queensland State League at 17 years of age. Later the same year, former Canadian rugby union international Mike Pyke was signed by the Sydney Swans AFL team as an international rookie at 24 years of age. Andrew McGrath, who was born in Canada, was drafted first overall in the 2016 AFL draft by Essendon. Kendra Heil has signed with Collingwood of AFL Women's.

The governing body for Aussie Rules in Canada is AFL Canada. 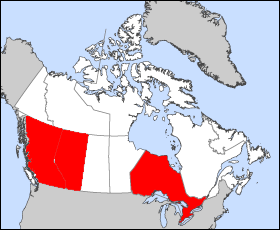 Canada boasts 9 women's football clubs nationwide. Youth girls development programs operate in Alberta, British Columbia, Ontario and Quebec. The national team, formed in 2007, is known as the "Northern Lights". They were formerly known as the "Eagles". They played in the first women's international footy matches during 2007, when they lost twice to the USA Freedom. In 2011 the national women's team competed in the inaugural women's division of the Australian Football International Cup, where they came second to Ireland. In 2014 the Northern lights became world champions when they defeated the Irish Banshees at the AFL International Cup. In 2015 the Northern Lights defeated the USA Freedom to win the annual 49th Parallel Cup.

2016 Banff is under development.

TV coverage of the AFL in Canada has historically included the weekly highlights program going back to the 1980s. In the mid 1990s when ESPN briefly reacquired the rights to the AFL in US again (due to lobbying by fans associated with AFANA), the sport first appeared on The Sports Network, better known as TSN. In succeeding years, the sport moved between several networks but was primarily on TSN. Coverage remained limited to highlights programs save for one time each year, where the Grand Final (championship game) was usually live. In 2006, due to growing demand and lobbying by AFANA for regular live coverage, the new Setanta Sports acquired rights in both Canada and the USA. In mid-season that year, live matches began appearing regularly on television in Canada for the first time on Setanta Sports (STS). When Setanta's North American operations failed in August 2010, the sport briefly moved to Rogers Sportsnet. Following ESPN winning the rights once again in the US, the sport returned to TSN, where it remains. TSN now airs one live match and one delayed match each round of the AFL season, both available in HD. For many years, fans in extreme western Canada have been able to see coverage via mid-size or large satellite dishes able to catch signals low on the horizon intended for the Pacific via first Australia TV and now by its successor Australia Plus. AFANA provides listings of Canadian TV schedules on its web site along with information on the coverage. In 2011, the first televised all-Canadian Aussie Rules match was shown on Rogers TV, and featured the Ottawa Swans hosting the Toronto Rebels.