Arial, sometimes marketed or displayed in software as Arial MT, is a sans-serif typeface and set of computer fonts in the neo-grotesque style. Fonts from the Arial family are packaged with all versions of Microsoft Windows from Windows 3.1 onwards, some other Microsoft software applications, Apple's macOS and many PostScript 3 computer printers. The typeface was designed in 1982, by Robin Nicholas and Patricia Saunders, for Monotype Typography. It was created to be metrically identical to the popular typeface Helvetica, with all character widths identical, so that a document designed in Helvetica could be displayed and printed correctly without having to pay for a Helvetica license. The Arial typeface comprises many styles: Regular, Italic, Medium, Medium Italic, Bold, Bold Italic, Black, Black Italic, Extra Bold, Extra Bold Italic, Light, Light Italic, Narrow, Narrow Italic, Narrow Bold, Narrow Bold Italic, Condensed, Light Condensed, Bold Condensed, and Extra Bold Condensed. The extended Arial type family includes more styles: Rounded (Light, Regular, Bold, Extra Bold); Monospaced (Regular, Oblique, Bold, Bold Oblique). Many of these have been issued in multiple font configurations with different degrees of language support. The most widely used and bundled Arial fonts are Arial Regular, Italic, Bold, and Bold Italic; the same styles of Arial Narrow; and Arial Black. More recently, Arial Rounded has also been widely bundled. In Office 2007, Arial was replaced by Calibri as the default typeface in PowerPoint, Excel, Outlook, and Word.

Embedded in version 3.0 of the OpenType version of Arial is the following description of the typeface: In 2005, Robin Nicholas said, "It was designed as a generic sans serif; almost a bland sans serif." Arial is a neo-grotesque typeface: a design based on nineteenth-century sans-serifs, but regularized to be more suited to continuous body text and to form a cohesive font family. Apart from the need to match the character widths and approximate/general appearance of Helvetica, the letter shapes of Arial are also strongly influenced by Monotype's own Monotype Grotesque designs, released in or by the 1920s, with additional influence from 'New Grotesque', an abortive redesign from 1956. The designs of the ''R'', ''G'' and ''r'' also resemble Gill Sans. The changes cause the typeface to nearly match Linotype Helvetica in both proportion and weight (see figure), and perfectly match in width. Monotype executive Allan Haley observed, "Arial was drawn more rounded than Helvetica, the curves softer and fuller and the counters more open. The ends of the strokes on letters such as c, e, g and s, rather than being cut off on the horizontal, are terminated at the more natural angle in relation to the stroke direction." Matthew Carter, a consultant for IBM during its design process, described it as "a Helvetica clone, based ostensibly on their Grots 215 and 216". The styling of Arabic glyphs comes from Times New Roman, which have more varied stroke widths than the Latin, Greek, Cyrillic glyphs found in the font. Arial Unicode MS uses monotone stroke widths on Arabic glyphs, similar to Tahoma. The Cyrillic, Greek and Coptic Spacing Modifier Letters glyphs initially introduced in Arial Unicode MS, but later debuted in Arial version 5.00, have different appearances.

IBM debuted two printers for the in-office publishing market in 1982: the 240-DPI 3800-3 laserxerographic printer, and the 600-DPI 4250 electro-erosion laminate typesetter. Monotype was under contract to supply bitmap fonts for both printers. The fonts for the 4250, delivered to IBM in 1983, included Helvetica, which Monotype sub-licensed from Linotype. For the 3800-3, Monotype replaced Helvetica with Arial. The hand-drawn Arial artwork was completed in 1982 at Monotype by a 10-person team led by Robin Nicholas and Patricia Saunders and was digitized by Monotype at 240 DPI expressly for the 3800-3. IBM named the font Sonoran Sans Serif due to licensing restrictions and the manufacturing facility's location (Tucson, Arizona, in the Sonoran Desert), and announced in early 1984 that the Sonoran Sans Serif family, "a functional equivalent of Monotype Arial", would be available for licensed use in the 3800-3 by the fourth quarter of 1984. There were initially 14 point sizes, ranging from 6 to 36, and four style/weight combinations (Roman medium, Roman bold, italic medium, and italic bold), for a total of 56 fonts in the family. Each contained 238 graphic characters, providing support for eleven national languages: Danish, Dutch, English, Finnish, French, German, Italian, Norwegian, Portuguese, Spanish, and Swedish. Monotype and IBM later expanded the family to include 300-DPI bitmaps and characters for additional languages. In 1989, Monotype produced PostScript Type 1 outline versions of several Monotype fonts, but an official PostScript version of Arial was not available until 1991. In the meantime, a company called Birmy marketed a version of Arial in a Type 1-compatible format. In 1990, Robin Nicholas, Patricia Saunders and Steve Matteson developed a TrueType outline version of Arial which was licensed to Microsoft. In 1992, Microsoft chose Arial to be one of the four core TrueType fonts in Windows 3.1, announcing the font as an "alternative to Helvetica". Matthew Carter has noted that the deal was complex and included a bailout of Monotype, which was in financial difficulties, by Microsoft. Microsoft would later extensively fund the development of Arial as a font that supported many languages and scripts. Monotype employee Rod MacDonald noted:

As to the widespread notion that Microsoft did not want to pay licensing fees or Helvetica onotype directorAllan Haley has publicly stated, more than once, that the amount of money Microsoft paid over the years for the development of Arial could finance a small country.

Arial ultimately became one of several clones of PostScript standard fonts created by Monotype in collaboration with or sold to Microsoft around this time, including Century Gothic (a clone of ITC Avant Garde), Book Antiqua (Palatino) and Bookman Old Style (ITC Bookman).

TrueType editions of Arial have shipped as part of Microsoft Windows since the introduction of Windows 3.1 in 1992; Arial was the default font. From 1999 until 2016, Microsoft Office shipped with Arial Unicode MS, a version of Arial that includes many international characters from the Unicode standard. This version of the typeface was for a time the most widely distributed pan-Unicode font. The font was dropped from Microsoft Office 2016 and has been deprecated; continuing growth of the number of characters in Unicode and limitations on the number of characters in a font meant that Arial Unicode could no longer perform the job it was originally created for. Arial MT, a PostScript version of the Arial font family, was distributed with Acrobat Reader 4 and 5. PostScript does not require support for a specific set of fonts, but Arial and Helvetica are among the 40 or so typeface families that PostScript Level 3 devices typically support. Mac OS X (now known as macOS) was the first Mac OS version to include Arial; it was not included in classic Mac OS. The operating system ships with Arial, Arial Black, Arial Narrow, and Arial Rounded MT. However, the default macOS font for sans-serif/Swiss generic font family is Helvetica. The bundling of Arial with Windows and macOS has contributed to it being one of the most widely distributed and used typefaces in the world. In 1996, Microsoft launched the Core fonts for the Web project to make a standard pack of fonts for the Internet. Arial in TrueType format was included in this project. The project allowed anyone to download and install these fonts for their own use (on end user's computers) without any fee. The project was terminated by Microsoft in August 2002, allegedly due to frequent EULA violations. For MS Windows, the core fonts for the web were provided as self-extracting executables (.exe); each included an embedded cabinet file, which can be extracted with appropriate software. For the Macintosh, the files were provided as BinHexed StuffIt archives (.sit.hqx). The latest font version that was available from ''Core fonts for the Web'' was 2.82, published in 2000. Later versions (such as version 3 or version 5 which include many new characters) were not available from this project. A Microsoft spokesman declared in 2002 that members of the open source community ''"will have to find different sources for updated fonts. ... Although the EULA did not restrict the fonts to just Windows and Mac OS, they were only ever available as Windows .exe's and Mac archive files."'' The chief technical officer of Opera Software cited the cancellation of the project as an example of Microsoft resisting interoperability.

The known variants of Arial include: 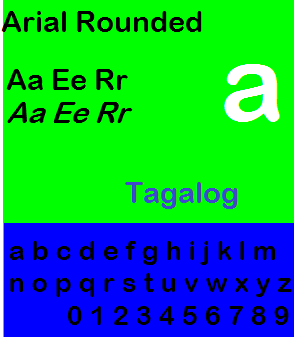 Arial Nova's design is based on the 1982's Sonora Sans bitmapped fonts, which were in fact Arial renamed to avoid licensing issues. It was bundled with Windows 10, and is offered free of charge on Microsoft Store. It contains Regular, Bold and Light weights, corresponding italics and corresponding Condensed widths.

Ascender Corporation sells the font in Arial WGL family, as well as the Arial Unicode.


Arial in other font families

* SM used in City or Center since 2010, later in 2011 upgraded Capitalized after used in SM City San Pablo. It also uses the logo of SMDC in Arial Black.

* Core fonts for the Web * List of fonts * :Category:Monotype typefaces – typefaces owned by or designed for Monotype Imaging