The Amorites (; Sumerian 𒈥𒌅 ''MAR.TU''; Akkadian ''Amurrūm'' or ''Tidnum''; Egyptian ''Amar''; he|אמורי ''ʼĔmōrī''; grc|Ἀμορραῖοι) were an ancient Northwest Semitic-speaking people from the Levant who also occupied large parts of southern Mesopotamia from the 21st century BC to the end of the 17th century BC, where they established several prominent city-states in existing locations, such as Isin, Larsa and later notably Babylon, which was raised from a small town to an independent state and a major city. The term ''Amurru'' in Akkadian and Sumerian texts refers to the Amorites, their principal deity and an Amorite kingdom. The Amorites are also mentioned in the Bible as inhabitants of Canaan both before and after the conquest of the land under Joshua.

In the earliest Sumerian sources concerning the Amorites, beginning about 2400 BC, the land of the Amorites ("the ''Mar.tu'' land") is associated not with Mesopotamia but with the lands to the west of the Euphrates, including Canaan and what was to become Syria by the 3rd century BC, then known as ''The land of the Amurru'', and later as Aram and Eber-Nari. They appear as an uncivilized and nomadic people in early Mesopotamian writings from Sumer, Akkad, and Assyria, to the west of the Euphrates. The ethnic terms ''Mar.tu'' ("Westerners"), ''Amurru'' (suggested in 2007 to be derived from ''aburru'', "pasture") and ''Amor'' were used for them in Sumerian, Akkadian, and Ancient Egyptian respectively. From the 21st century BC, possibly triggered by a long major drought starting about 2200 BC, a large-scale migration of Amorite tribes infiltrated southern Mesopotamia. They were one of the instruments of the downfall of the Third Dynasty of Ur, and Amorite dynasties not only usurped the long-extant native city-states such as Isin, Larsa, Eshnunna, and Kish, but also established new ones, the most famous of which was to become Babylon, although it was initially a minor insignificant state. Known Amorites wrote in a dialect of Akkadian found on tablets at Mari dating from 1800–1750 BC. Since the language shows northwest Semitic forms, words and constructions, the Amorite language is a Northwest Semitic language, and possibly one of the Canaanite languages. The main sources for the extremely limited knowledge about Amorite are the proper names, not Akkadian in style, that are preserved in such texts. The Akkadian language of the native Semitic states, cities and polities of Mesopotamia (Akkad, Assyria, Babylonia, Isin, Kish, Larsa, Ur, Nippur, Uruk, Eridu, Adab, Akshak, Eshnunna, Nuzi, Ekallatum, etc.), was from the east Semitic, as was the Eblaite of the northern Levant.

There is a wide range of views regarding the Amorite homeland. One extreme is the view that /''māt amurrim'' covered the whole area between the Euphrates and the Mediterranean Sea, the Arabian Peninsula included. The most common view is that the “homeland” of the Amorites was a limited area in central Syria identified with the mountainous region of Jebel Bishri. Since the Amorite language is closely related to the better-studied Canaanite languages, both being branches of the Northwestern Semitic languages, as opposed to the South Semitic languages found in the Arabian Peninsula, they are usually considered native to the region around Syria and the Transjordan.

In the earliest Sumerian texts, all western lands beyond the Euphrates, including the modern Levant, were known as "the land of the (Amorites)". The term appears in ''Enmerkar and the Lord of Aratta'', which describes it in the time of Enmerkar as one of the regions inhabited by speakers of a different language. Another text known as ''Lugalbanda and the Anzud bird'' describes how, 50 years into Enmerkar's reign, the Martu people arose in Sumer and Akkad (southern Mesopotamia), necessitating the building of a wall to protect Uruk. There are also sparse mentions in tablets from the East Semitic-speaking kingdom of Ebla, dating from 2500 BC to the destruction of the city BC: from the perspective of the Eblaites, the Amorites were a rural group living in the narrow basin of the middle and upper Euphrates in northern Syria. For the Akkadian kings of central Mesopotamia was one of the "Four Quarters" surrounding Akkad, along with Subartu/Assyria, Sumer, and Elam. Naram-Sin of Akkad records successful campaigns against them in northern Syria BC, and his successor, Shar-Kali-Sharri, followed suit. By the time of the last days of the Third Dynasty of Ur, the immigrating Amorites had become such a force that kings such as Shu-Sin were obliged to construct a wall from the Tigris to the Euphrates to hold them off. The Amorites appear as nomadic tribes under chiefs, who forced themselves into lands they needed to graze their herds. Some of the Akkadian literature of this era speaks disparagingly of the Amorites and implies that the Akkadian- and Sumerian-speakers of Mesopotamia viewed their nomadic and primitive way of life with disgust and contempt: "They have prepared wheat and ''gú-nunuz'' (grain) as a confection, but an Amorite will eat it without even recognizing what it contains!" As the centralized structure of the Third Dynasty slowly collapsed, the component regions, such as Assyria in the north and the city-states of the south such as Isin, Larsa and Eshnunna, began to reassert their former independence, and the areas in southern Mesopotamia with Amorites were no exception. Elsewhere, the armies of Elam, in southern Iran, were attacking and weakening the empire, making it vulnerable.

Many Amorite chieftains in southern Mesopotamia aggressively took advantage of the failing empire to seize power for themselves. There was not an Amorite invasion of southern Mesopotamia as such, but Amorites ascended to power in many locations, especially during the reign of the last king of the Neo-Sumerian Empire, Ibbi-Sin. Leaders with Amorite names assumed power in various places, usurping native Akkadian rulers, including in Isin, Eshnunna and Larsa. The small town of Babylon, unimportant both politically and militarily, was raised to the status of a minor independent city-state, under Sumu-abum in 1894 BC. The Elamites finally sacked Ur in BC. Some time later, the Old Assyrian Empire (1750 BC) became the most powerful entity in Mesopotamia immediately preceding the rise of the Amorite king Hammurabi of Babylon. The new Assyrian monarchic line was founded by BC; their kings repelled attempted Amorite incursions, and may have countered their influence in the south as well under Erishum I, Ilu-shuma and Sargon I. However, even Assyria eventually found its throne usurped by an Amorite in 1809 BC: the last two rulers of the Old Assyrian Empire period, Shamshi-Adad I and Ishme-Dagan, were Amorites who originated in Terqa (now in northeastern Syria).

The era ended in northern Mesopotamia, with the defeat and expulsion of the Amorites and Amorite-dominated Babylonians from Assyria by Puzur-Sin and king Adasi between 1740 and 1735 BC, and in the far south, by the rise of the native Sealand Dynasty BC. The Amorites clung on in a once-more small and weak Babylon until the Hittites' sack of Babylon ( BC), which ended the Amorite presence, and brought new ethnic groups, particularly the Kassites, to the forefront in southern Mesopotamia. From the 15th century BC onward, the term ''Amurru'' is usually applied to the region extending north of Canaan as far as Kadesh on the Orontes River in northern Syria. After their expulsion from Mesopotamia, the Amorites of Syria came under the domination of first the Hittites and, from the 14th century BC, the Middle Assyrian Empire (1365–1050). They appear to have been displaced or absorbed by a new wave of semi-nomadic West Semitic-speaking peoples, known collectively as the Ahlamu during the Late Bronze Age collapse. The Arameans rose to be the prominent group amongst the Ahlamu, and from c. 1200 BC on, the Amorites disappeared from the pages of history. From then on, the region that they had inhabited became known as Aram ("Aramea") and Eber-Nari.

The language was first attested in the 21st-20th centuries BC and as an archaic Northwest Semitic language and belonging to the branch of Canaanite dialects. The language is found in the proper names recorded by scribes from the era of Amorite rulership in Babylonia, during the end of the 3rd millennium BC, and occasionally in ancient Egyptian writings. The Amorite kings communicated with other rulers through the Akkadian language. During the 15th-14th centuries BC, the Amorite city of Qatna received deep influence from the Hurrian language, as scribes of the city incorporated Hurrian elements into their texts. In the 2nd millennium BC, the Ugaritic language directly descended from the Amorite language, with Amorite itself going extinct over the course of the 2nd millennium BC.

The Amurru share the name with their patron deity, Amurru or Martu (also known as ''Ilu Amurru'', DMAR.TU), a storm and weather deity and husband to Asherah. Amorites often had their god's name within their own. 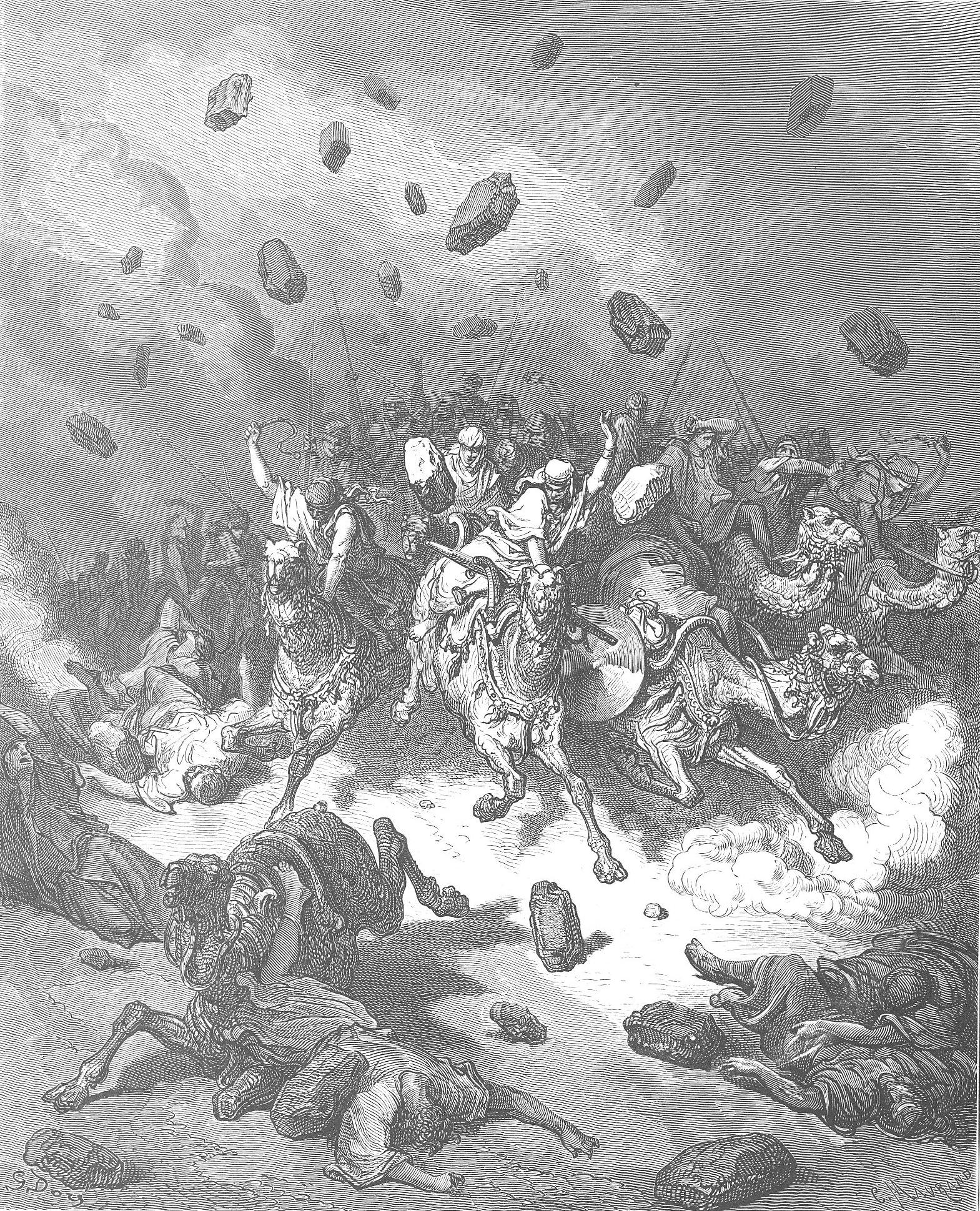 The term ''Amorites'' is used in the Bible to refer to certain highland mountaineers who inhabited the land of Canaan, described in Genesis as descendants of Canaan, the son of Ham (). They are described as a powerful people of great stature "like the height of the cedars" () who had occupied the land east and west of the Jordan. The height and strength mentioned in Amos 2:9 has led some Christian scholars, including Orville J. Nave, who wrote the Nave's Topical Bible, to refer to the Amorites as "giants". In Deuteronomy, the Amorite king, Og, was described as the last "of the remnant of the Rephaim" (). The terms Amorite and Canaanite seem to be used more or less interchangeably, Canaan being more general and Amorite a specific component among the Canaanites who inhabited the land. The Biblical Amorites seem to have originally occupied the region stretching from the heights west of the Dead Sea () to Hebron (), embracing "all Gilead and all Bashan" (), with the Jordan valley on the east of the river (), the land of the "two kings of the Amorites". Sihon and Og ( and ). Both Sihon and Og were independent kings. The Amorites seem to have been linked to the Jerusalem region, and the Jebusites may have been a subgroup of them (). The southern slopes of the mountains of Judea are called the "mount of the Amorites" (). The Book of Joshua speaks of the five kings of the Amorites were first defeated with great slaughter by Joshua (). Then, more Amorite kings were defeated at the waters of Merom by Joshua (). It is mentioned that in the days of Samuel, there was peace between them and the Israelites (). The Gibeonites were said to be their descendants, being an offshoot of the Amorites who made a covenant with the Hebrews. When Saul later broke that vow and killed some of the Gibeonites, God is said to have sent a famine to Israel.

The view that Amorites were fierce, tall nomads led to an anachronistic theory among some racialist writers in the 19th century that they were a tribe of "Aryan" warriors who at one point dominated the Israelites. The theory originated with Felix von Luschan, and did fit then-current models of Indo-European migrations; Luschan later abandoned this theory. Houston Stewart Chamberlain claimed that King David and Jesus were both Aryans of Amorite extraction. The argument was repeated by the Nazi ideologue Alfred Rosenberg. However, the Amorites certainly spoke exclusively a Semitic language, followed Semitic religions of the Near East and had distinctly Semitic personal names. Their origins were believed to have been the lands immediately to the west of Mesopotamia, in the Levant (modern Syria), and so they are regarded as one of the Semitic peoples.