''Eastern Algonquian'' is a true genetic subgrouping. The ''Plains Algonquian'' and the ''Central Algonquian'' groups are not genetic groupings but rather areal groupings. Although these areal groups often do share linguistic features, these commonalities are usually attributed to language contact. Paul Proulx has argued that this traditional view is incorrect, and that ''Central Algonquian'' (in which he includes the Plains Algonquian languages) is a genetic subgroup, with Eastern Algonquian consisting of several different subgroups. However, this classification scheme has failed to gain acceptance from other specialists in the Algonquian languages. Instead, the commonly accepted subgrouping scheme is that proposed by Ives Goddard (1994). The essence of this proposal is that Proto-Algonquian originated with people to the west, perhaps in the Plateau region of Idaho and Oregon or the Rocky Mountain-Great Plains boundary of Montana, and then moved east, dropping off subgroups as people migrated. By this scenario, Blackfoot was the first language to branch off, which coincides well with its being the most divergent language of Algonquian. In west-to-east order, the subsequent branchings were: * Arapaho-Gros Ventre, Cree-Montagnais, Menominee, and Cheyenne; * then the core Great Lakes languages: (Ojibwe–Potawatomi, Shawnee, Sauk–Fox–Kickapoo, and Miami–Illinois); and * finally, Proto-Eastern Algonquian. This historical reconstruction accords best with the observed levels of divergence within the family, whereby the most divergent languages are found furthest west (since they constitute the earliest branchings during eastern migration), and the shallowest subgroupings are found furthest to the east (Eastern Algonquian, and arguably Core Central). Goddard also points out that there is clear evidence for pre-historical contact between Eastern Algonquian and Cree-Montagnais, as well as between Cheyenne and Arapaho-Gros Ventre. There has long been especially extensive back-and-forth influence between Cree and Ojibwe. It has been suggested that the "Eastern Great Lakes" languages – what Goddard has called "Core Central", e.g., Ojibwe–Potawatomi, Shawnee, Sauk–Fox–Kickapoo, and Miami-Illinois (but not Cree–Montagnais or Menominee) – may also constitute their own genetic grouping within Algonquian. They share certain intriguing lexical and phonological innovations. However, this theory has not yet been fully fleshed out and is still considered conjectural. Algonquian is sometimes said to have included the extinct Beothuk language of Newfoundland, whose speakers were both in geographic proximity to Algonquian speakers and who share DNA in common with the Algonquian-speaking Miꞌkmaq. However, linguistic evidence is scarce and poorly recorded, and it is unlikely that reliable evidence of a connection can be found.

The Algonquian language family is known for its complex polysynthetic morphology and sophisticated verb system. Statements that take many words to say in English can be expressed with a single word. Ex: (Menominee) ''paehtāwāēwesew'' "He is heard by higher powers" (''paeht''- 'hear', -''āwāē''- 'spirit', -''wese''- passivizer, -''w'' third-person subject) or (Plains Cree) ''kāstāhikoyahk'' "it frightens us". These languages have been extensively studied by Leonard Bloomfield, Ives Goddard, and others. Algonquian nouns have an animate/inanimate contrast: some nouns are classed as ''animate'', while all other nouns are ''inanimate''. There is ongoing debate over whether there is a semantic significance to the categorization of nouns as animate or inanimate, with scholars arguing for it as either a clearly semantic issue, or a purely syntactic issue, along with a variety of arguments in between. More structurally inclined linguistic scholars have argued that since there is no consistent semantic system for determining the animacy of a noun, that it must be a purely linguistic characterization. Anthropological linguists have conversely argued the strong connection between animacy and items viewed as having spiritual importance. Another important distinction involves the contrast between nouns marked as ''proximate'' and those marked as ''obviative''. Proximate nouns are those deemed most central or important to the discourse, while obviative nouns are those less important to the discourse. There are personal pronouns which distinguish three persons, two numbers (singular and plural), inclusive and exclusive first person plural, and proximate and obviative third persons. Verbs are divided into four classes: transitive verbs with an animate object (abbreviated "TA"), transitive verbs with an inanimate object ("TI"), intransitive verbs with an animate subject ("AI"), and intransitive verbs with an inanimate subject ("II"). 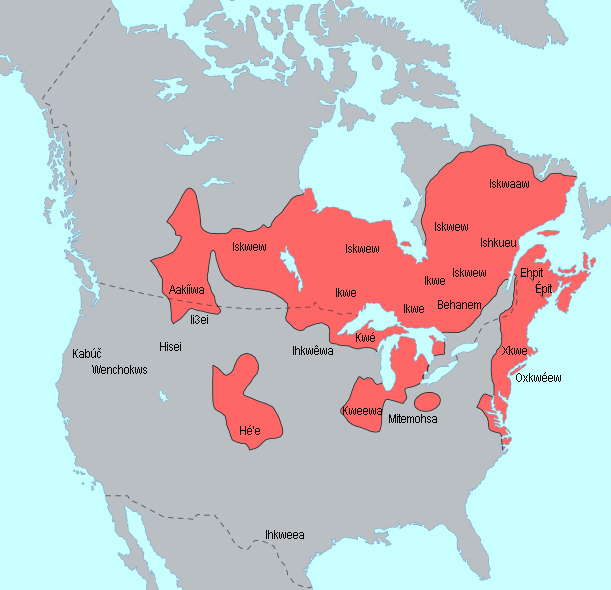