In World War I, New York's 27th Division was one of only three divisions formed from units entirely from a single state National Guard, the other two being Illinois and Pennsylvania. However, not all New Yorkers served in the 27th. Its initial strength was 991 officers and 27,114 enlisted men. *Casualties: Total 8,334 (KIA: 1,442; WIA: 6,892). * Inactivated: April 1919.

Prior to departing to training, the division participated in a large send-off parade in New York City along 5th Avenue on 30 August 1917. The 7th Infantry Regiment was the first to leave for training on 11 September 1917, by train. The training was conducted at a purpose-built temporary facility at Camp Wadsworth, Spartanburg, South Carolina. Nearby hotels such as the Cleveland Hotel became centers for social life. The camp also housed seven YMCA Huts and a Knights of Columbus Hall. While the 27th had African-American service-men they were not permitted to enter the service organization clubs on base, which were segregated, until a black soldier's club was built in early 1918. The division shipped out on 20 April 1918.

Called into federal service on 15 July 1917, the Twenty-Seventh Division hastily recruited to increase its numbers and late in August, was concentrated at Camp Wadsworth, near Spartanburg, SC, for intensive training. In the spring of 1918, the division began its movement toward embarkation camps. The division's advance detachment left Hoboken on 2 May and arrived at Brest, France, 10 May 1918. Late in June the last units of the Twenty-Seventh Division had arrived safely overseas. Until 24 July the division was in the final stages of training under British mentors, in Picardy and Flanders. On 25 July, the 27th Division less its artillery brigade and 102nd Ammunition Trains, occupied the Dickebusch Lake and Scherpenberg sectors in Flanders. In just over a month, this operation merged into the Ypres-Lys action, and then, from 19 August to 3 September, the 27th was on its own. The great Somme "push," lasting from 24 September to 1 October, saw the 27th (under command of the Australian Corps with the 30th US Division) engaged in severe fighting along the Saint Quentin Canal Tunnel—one of the out-lying strong points of the supposedly impregnable Hindenburg Line. Following heavy losses, the 27th was placed into reserve for rest and replacements at the conclusion of the first phase of the Somme Push. Six days later the Twenty-Seventh Division was back into action again, moving steadily toward Busigny on the heels of the retiring Germans. Operations until 9 October were supported by Australian Artillery then by British artillery units. The 27th Division had, in conjunction with British and Australian forces and the 30th Division, American Expeditionary Force, cracking the Hindenburg line wide open. The 52d Field Artillery Brigade and the 102nd Ammunition Train of the New York Division had not gone with the rest of the Twenty-seventh Division to the British front in Flanders. They had moved up on 28 October, to support the Seventy-Ninth Division in the Argonne. Meanwhile, the Twenty-Seventh Division units which had seen heavy action in Flanders, had moved back to an area near the French seaport of Brest. *Major Operations: Meuse-Argonne (only the artillery), Ypres-Lys, Somme Offensive. *Saw service with several British and the 30th Infantry Division, U.S. Army. *Initially stationed in the East Poperinghe Line. **Battle of Dickebusche Lake, Summer 1918 **Battle of Vierstratt Ridge, Summer 1918 **Struggled to break the German defensive Hindenburg Line, September 1918. **Somme Offensive, 25 September 1918 **Selle River, November 1918 The 27th did break the Hindenburg line during the Battle of the Somme and forced a German retreat from their defensive line and forced the Germans to a final confrontation. After a final confrontation with the retreating Germans at the Selle River the Armistice ended the fighting and the division was sent home in February 1919, to be mustered out several months later. 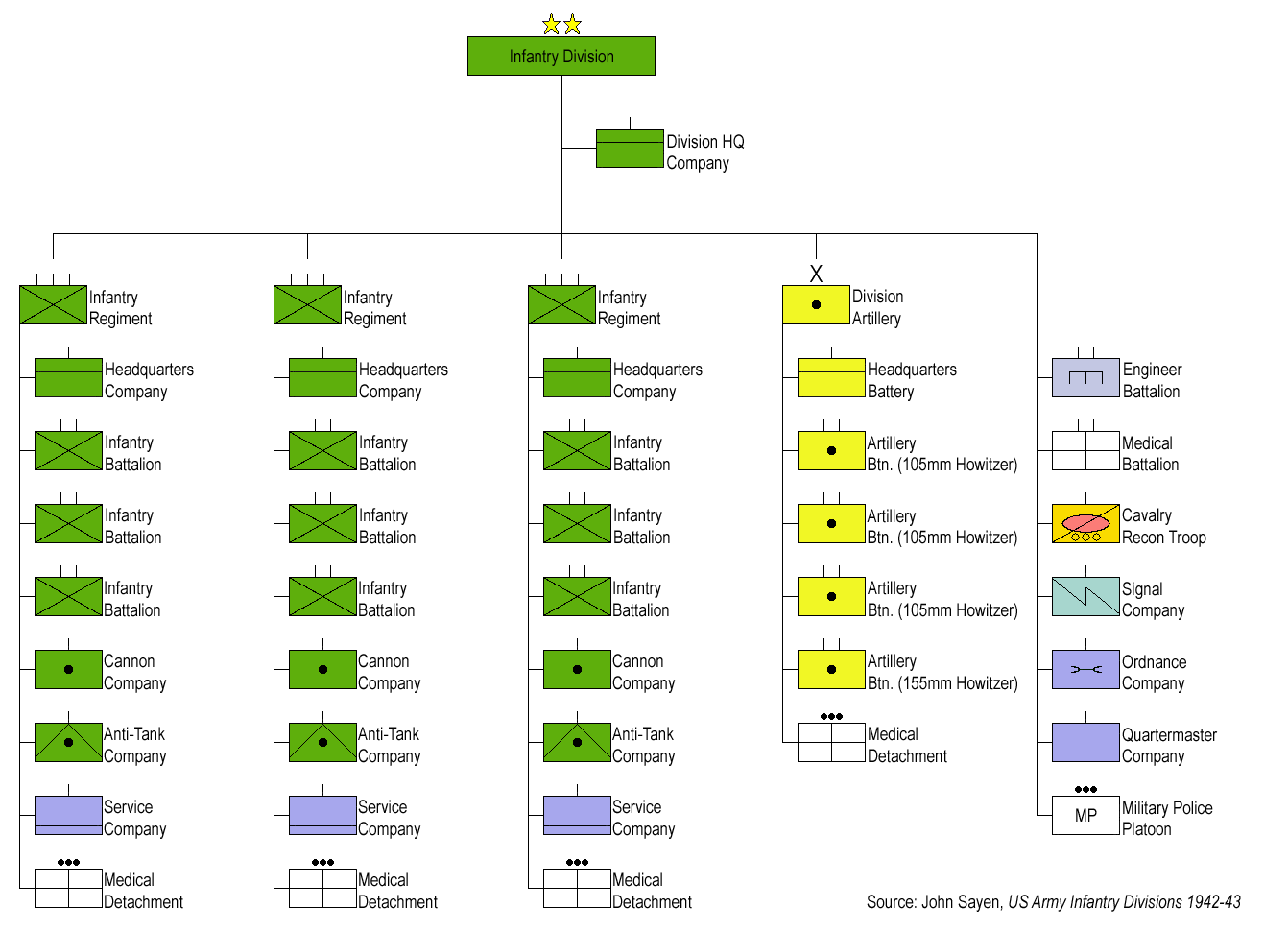 The first stateside division to be deployed in response to the attack on Pearl Harbor, the 27th Division departed Fort McClellan 14 December 1941 for California to establish blocking positions against an anticipated seaborne invasion of the United States southwestern coast. They were further transferred into the Pacific Theater of Operations and arrived in Hawaii, 21 May 1942, to defend the outer islands from amphibious attack. The 165th Infantry and 3rd Battalion, 105th Infantry first saw action against the enemy during the attack and capture of Makin Atoll in the Gilbert Islands, 21–24 November 1943. The 1st and 3rd Battalions of the 106th Regiment participated in the attack on Eniwetok Atoll, 19–26 February 1944, returning to Oahu in March. During this mission, the 2nd Battalion, 106th Infantry landed unopposed on Majuro Island, 1 February, and completed its seizure, 3 February. The division began preparations for the Marianas operations, 15 March. On D-day plus 1, 16 June 1944, elements landed at night on Saipan to support the Second and Fourth Marine Divisions. A beachhead was established and Aslito Airfield captured, 18 June. Fighting continued throughout June. Marine General Holland Smith, unsatisfied with the performance of the 27th Division, relieved its commander, Army General Ralph C. Smith., which led to angry recrimination from senior Army commanders, including Army Chief of Staff George C. Marshall. During a pitched battle, 7 July, Japanese overran elements of the division in a banzai attack, but organized resistance was crushed the next day. During the months of July and August, the 27th cleaned out isolated pockets in the mountains and cliffs of Saipan. Beginning in the middle of August, the division moved to the New Hebrides for rest and rehabilitation. On 25 March 1945, the 27th sailed from Espiritu Santo, arriving at Okinawa, 9 April 1945. The Division participated in the XXIV Corps general attack, 19 April 1945, securing a dominating ridge line south of Machinato and Kakazu. Machinato Airfield was captured, 28 April, after a severe struggle. On 1 May, the division was relieved by the 1st Marine Division and attached to the Island Command for garrison duty. Tori Shima was seized, 12 May, without opposition. The 27th attacked from the south end of Ishikawa Isthmus to sweep the northern sector of Okinawa. The enemy fought bitterly on Onnatake Hill from 23 May until 2 June, before losing the strong point. After a mopping-up period, the division left Okinawa, 7 September 1945, moved to Japan and occupied Niigata and Fukushima Prefectures.