. . From February to April 2006 many rivers across Europe, especially the Elbe River|Elbe and Danube, swelled due to heavy rain and melting snow and rose to record levels. These are the longest rivers in Central Europe.

High Danube levels caused significant flooding in parts of Serbia, Bulgaria and Romania, with damage to property and infrastructure in localities near the shores of the river. The effects of high water across Southeastern Europe were blamed on the poor levee systems in the affected countries.

, Bulgaria , Bulgaria show the rise of water level , Serbia, at its highest level In Vidin an industrial district was flooded and over 300 people were evacuated to a tent city about 20 kilometers from the town. In Lom, Bulgaria 25 houses, a hotel, the port (which is the second biggest Bulgarian port on the River Danube), and the Danube Park were flooded. Boruna quarter in the north-western part of the city has declared a state of emergency. Of the 30,000 people who live in Lom, 6,000 people are in danger due to the flooding. The two schools are prepared to accommodate any people if found necessary. A few blocks along the water's edge in the city of Nikopol were flooded. 60 people were evacuated and 57 buildings have been flooded so far as well as the main road from Nikopol west towards Pleven. In Rousse the Danube reached 9 meters, beating the previous record at 8,88 from 1970. In total at least 400 buildings on Bulgaria's northern border have been flooded and several have been completely destroyed.

The 2006 European floods were one of the most devastating natural disaster from the History of Romania. Although there were no human victims, the estimated damage is thought to surpass the floods of 1970. By April 16 over 848 houses were reportedly flooded, with 221 destroyed. The height of the Danube at the beginning of the flood was still below the record level registered in 1895. Romanian officials ordered the controlled flooding of thousands of hectares of unused agricultural spaces to prevent further damage in cities across Romania. 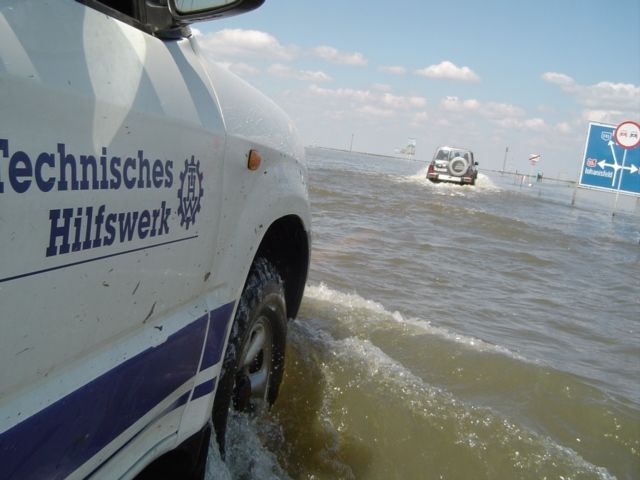 On April 16, in the localities of Rast and Negoi, Dolj County, more than 800 residents were evacuated, as a dam collapsed due to the rising waters of the Danube. Hundreds of houses were flooded and more than 100 of them collapsed. By April 22, the number of people evacuated from the locality reached 4,000. In the port city of Călăraşi, a recently opened hotel was flooded on Monday, April 17, causing significant damage to the building and leading to the evacuation of tens of tourists. By this date, the floods had swamped of land, of roads and destroyed 20 bridges, while also causing agricultural damage amounting to 4.6 million lei (US$1.5 million). Additionally, five of Romania's nine Danube ports were closed during the flooding period. However, Romanian authorities said on April 22 that the worst of the flooding had passed. Elena Anghel, hydrologist at Romania's National Hydrology Institute stated that, "The forecasts are optimistic. The river will probably remain stable for another two days and then start to fall." However, by April 28, after several weeks of pressure, key levées along the Danube began collapsing in the counties of Dolj, Călăraşi, Constanţa, Tulcea and Galaţi. The authorities carried out further evacuations in these regions, the number of evacuated people rising to 16,000. By this date, over 300 houses were completely destroyed with more than 150 villages and towns being directly affected by the floods.

on NASA's Terra satellite on April 24, 2006. On April 16, 2006, a state of emergency was declared in 10 regions of Serbia. The areas around Serbia's second largest city Novi Sad were particularly vulnerable.