On 3 March 1791, Congress added to the Army "The Second Regiment of Infantry" from which today's First Infantry draws its heritage. In September of that year, elements of it and the original 1st Infantry Regiment (today's 3rd United States Infantry Regiment (The Old Guard)), with sizable militia complements, all under command of General Arthur St. Clair, were sent against the Miami Indians. St. Clair served as a major general in the Continental Army and was now appointed "General in Chief," superseding the first commander of the regiment, Josiah Harmar. Fighting against the Miamis, St. Clair's soldiers were untrained, ill-equipped, underfed, and sickly. This resulted in a disastrous defeat, at the Battle of the Wabash, in which the entire U.S. Army suffered a loss in killed and wounded of nearly 900 out of a total strength of 900.

Legion of the United States 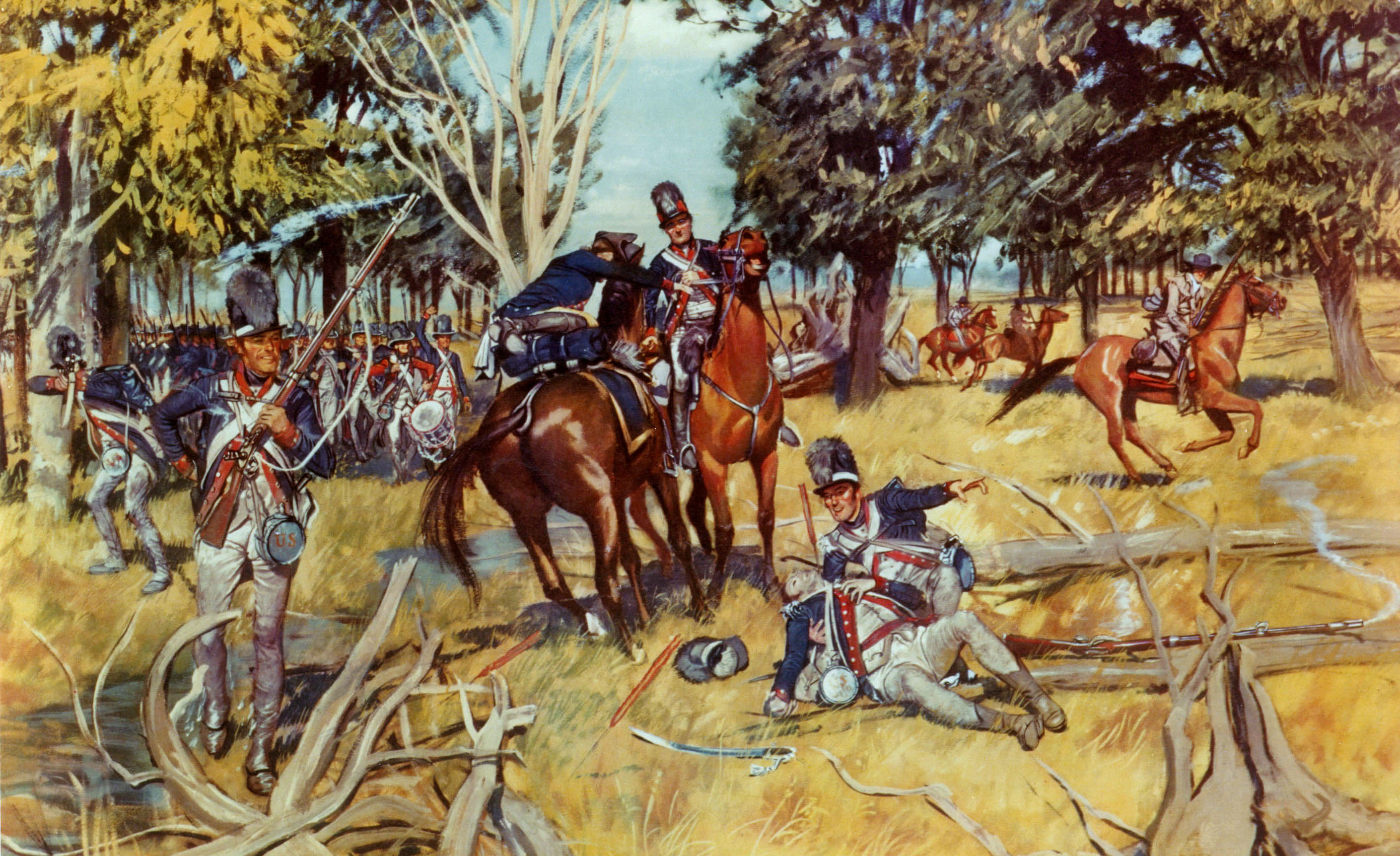 In 1792, Congress created the Legion of the United States, which was a combined arms force of infantry, cavalry, and artillery under the command of Major General Anthony Wayne. MG Wayne had become a hero of the Revolutionary War when he led a small force against a larger British force to regain control of Stony Point, a crucial point on the Hudson River just south of West Point, New York. This Legion in which the Second Infantry became the "Infantry of the Second Sub-Legion," finally decisively defeated the Northwest Indian confederacy and its British support at Fallen Timbers in the Old Northwest (Ohio Country) on 20 August 1794.

The 2nd Infantry was consolidated May–October 1815 with the 3rd and 7th Infantry (both constituted 12 April 1808), and 44th Infantry (constituted 29 January 1813) to form the 1st Infantry Regiment. In the ensuing years the regiment was primarily concerned with Indian conflicts and the 1st was involved in the Black Hawk War of 1832 and the Second Seminole War from 1839 to 1842. During this time the regiment was commanded by many, now famous commanders including, Colonel Zachary Taylor, who would later become the 12th President of the United States and Second Lieutenant Jefferson Davis, who would become the President of the Confederate States in the American Civil War.

When War broke out with Mexico in 1846, the 1st Infantry Regiment was sent across the border with General Zachary Taylor's Army and participated in the storming of Monterrey where the regiment fought house to house in savage hand-to-hand combat. From Monterrey, the regiment was transferred to General Winfield Scott's command and participated in the first modern amphibious landing in American history at Vera Cruz in 1847.

Following the Mexican–American War, the regiment campaigned in the Texas area against the Comanches until the outbreak of the Civil War in 1861.

After escaping from rebel forces in Texas the regiment returned to the Mid-west and fought in the Mississippi area of operations. The regiment fought in one of the first battles of the Civil War at Wilson's Creek, Missouri, in August 1861. The 1st Infantry then campaigned with General Grant against Vicksburg in 1863. The end of the war found the regiment occupying New Orleans, Louisiana.

After the end of the Indian wars the regiment was occupied with quelling labor disputes in California.

War was declared with Spain in 1898 following the sinking of the USS ''Maine''. The First was quickly sent to Florida where it embarked on ships and was sent to Cuba. While in Cuba the regiment took part in the storming of the San Juan Heights and the capture of Santiago.

In 1900, following occupation duty in Cuba, the regiment was preparing for shipment to China to participate in the Boxer Rebellion. Instead, the regiment was detoured to deal with the rebellion on the Philippine Islands which had also been captured by the United States in the Spanish–American War. The regiment would fight in this guerrilla war in the Philippines from 1900 to 1902 and again from 1906 to 1908. Subsequently, the regiment was redeployed to garrison duties in Oahu, Hawaii.

1st Infantry Regiment was assigned on 11 September 1918 to the 13th Division at Fort Lewis. 13th ID never left Fort Lewis, and demobilized there on 8 March 1919. 1st IR was relieved on 8 March 1919 from assignment to the 13th Division and resumed separate regiment status. The regiment was again assigned 27 July 1921, this time to the 2nd Division, which was headquartered at Fort Sam Houston, and assigned to the U.S. VIII Corps.

On 10 January 1949, 1st IR was inactivated in Korea, and then was reactivated on 4 October 1950 at Fort Ord, California as a training regiment for units being sent to the fight in Korea. On 3 April 1956, the regiment was relieved from assignment to the 6th Infantry Division, and then was assigned on 15 May 1956 to the United States Military Academy at West Point, New York. On 15 May 1958 the regiment was reorganized under the Combat Arms Regimental System as HHC, 1st Battle Group, 1st Infantry Regiment. In 1960, the 1st Battle Group, 1st Infantry was reorganized under a concept that provided sufficient tactics instructors in the permanent party for continuity, but called for outside augmentation for the summer training program. This left the battle group with a Headquarters, Headquarters and Training Company, Service Company, Airborne Detachment, the 2nd Aviation Detachment, the USMA Band, Detachment 1 and 2 United States Army Hospital, and saw the attachment of the 50th Engineer Battalion (Construction) and the 57th Military Police Company. The old Military Police Detachment personnel formed the nucleus of the newly attached 57th Military Police Company. On 16 May 1961, the mission of providing tactical instruction for the Corps of Cadets along with the personnel involved, was transferred to a newly created Office of Military Instruction in the Department of Tactics. All enlisted personnel remained assigned to the battle group. On 1 February 1962, Service Company was eliminated and its personnel absorbed into Headquarters Company. On 1 January 1965, the 1st Battle Group, 1st Infantry was redesigned as the 1st Battalion, 1st Infantry. With the exception of transferring tactical instruction to the Office of Military Instruction (now DMI) in 1961, its mission was essentially unchanged. The 2nd Battalion was then assigned to Fort Benning, Georgia.

On 16 December 1994 the 2nd Battalion was reactivated at Fort Wainwright as part of the 6th Infantry Division (Light), which was reduced in size and reflagged as the 172nd Infantry Brigade (Separate) in April 1998.

In August 2005 2nd Battalion was deployed, along with the 172nd Stryker Brigade, to Mosul Iraq in support of Operation Iraqi Freedom. The battalion conducted counter insurgency operations aimed at securing the city of Mosul from an insurgency headed by the terrorist organization al-Qaeda in Iraq. After 12 months in Mosul 2nd Battalion was preparing to return to home station at Fort Wainwright, Alaska when their deployment was unexpectedly extended by Secretary of Defense Donald Rumsfeld. The 2nd Battalion, along with the entire 172nd Infantry Brigade, was subsequently sent to Baghdad, Iraq to quell rising sectarian violence. The 2nd Battalion returned home in December 2006 after 16 months in Iraq. It was inactivated on 16 December when the 172nd was reflagged as the 1st Stryker Brigade Combat Team, 25th Infantry Division, and the 2-1st Infantry was reflagged as the 1st Battalion, 24th Infantry.

The battalion was reactivated on 17 April 2007 as part of the 5th Brigade Combat Team, 2nd Infantry Division at Fort Lewis. On 17 February 2009, President Obama ordered 4,000 soldiers of 5th Stryker Brigade Combat Team to Afghanistan, along with 8,000 Marines. The deployment came as a result of the then-worsening situation in the Afghan war. These soldiers were to be deployed in the southeast, on the Afghan border. The brigade was scheduled to return to Joint Base Lewis–McChord in July 2010. After it returned, on 22 July, the 5th BCT was reflagged as the 2nd BCT of the 2nd ID and the battalion continued to serve with the latter.

* Shield: Per bend Gules and Azure, on a bend or a bendlet Argent indented of seven and counter indented of the same fimbriated Sable. * Crest: On a wreath of the colors Or and Gules the Arabic numeral "1" Azure fimbriated Or within a garland of laurel Vert. * Motto: ''Semper Primus'' (Always First).

# The regiment has a history of fighting in all the wars of the country and a logical grouping divides its campaigns or wars into 14 groups. These are heraldically represented by the 14 notches on the diagonal band across the shield. # The upper part of the shield is red, this was the color of the old 2nd Sub-legion. The lower part is blue the modern Infantry color. # The crest with the numeral within the laurel wreath of Victory and the motto long in use by the regiment are self-explanatory.

# The regiment has a history of fighting in all the wars of the country and a logical grouping divides its campaigns or wars into 14 groups. These are heraldically represented by the 14 notches on the diagonal band across the shield. # The upper part of the shield is red, this was the color of the old 2nd Sub-legion. # The lower part is blue the modern Infantry color. # The motto long in use by the regiment is self-explanatory.